MultiMonitor Taskbar adds new taskbar for each of the monitor if you have you have multi monitor setup. The taskbar of each monitor shows the windows open on respective monitor. The arrows displayed on the application title bar can be used to move the windows to the next monitor either on the left or right side. The windows can be move to the left or right monitor by using the hotkeys Hot-Keys CTRL+SHIFT+arrow. The multi monitor taskbar connects more than one computers in a multi-monitor setup. To move your mouse quickly between different monitors, use Multi Monitor Mouse. 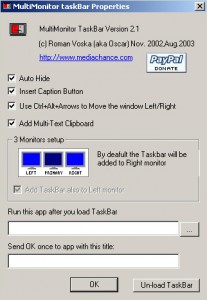 If you don’t have a multi-monitor video card, you can set the AGP video card as primary monitor and the PCI card as second monitor. If you have three monitors setup, you should use AGP video card that support dual display and a PCI video card.

Here are some features of Multi Monitor Taskbar: