Here’s a list of 5 free PC alarm clock software for Windows 10. Even though there are other devices that might be better suited for the role of an alarm clock (like a smartphone, or an actual alarm clock), there’re still those who are running their desktops 24/7, in their rooms, and are looking into using it as the alarm clock. Of course Windows 10 can also run on tablets, so alarm clock there makes more sense.

Here are some of the alarm clock software that I was able to find. 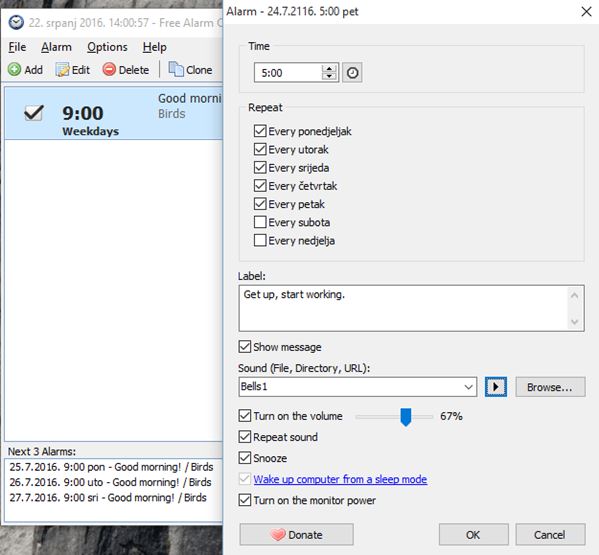 Free Alarm Clock by Comfort is a feature rich PC alarm clock software for Windows 10. You might have come across apps for Android and iOS from the same developers, under the same name. Desktop application has a different look and feel, obviously, but functions pretty much the same way that its mobile counterparts do.

After launching the application, the first thing that you’re going to see is a list of setup alarms, with 1 default alarm, set to go off at 9AM. New ones can be added by clicking on the “Add” button from the toolbar up top. Image of the alarm setup can be seen on the screenshot above. First select the time when the alarm needs go off. If it’s a repeat alarm you need to set the repeat days, then alarm message, melody, volume level, disable/enable snooze, and more. List of setup alarms can be exported and backed up. You can also clone existing alarms if you just need to change a few things on existing alarm when setting up a new alarm (instead of starting from scratch). Application runs in system tray for easier access.

Get Free Alarm Clock by Comfort. 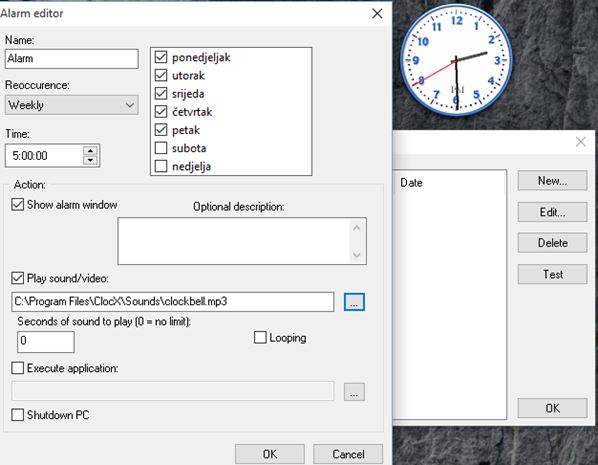 ClockX is actually a desktop clock software, with PC alarm clock built in. Analog clock desktop “widget” will be displayed on your screen after installing and running ClockX.

Right click on the widget to access the menu. “Alarms” option will open up an empty list of alarms. Click on the “New” button there to start up the “Alarm Editor”. One-time, weekly, bi-weekly, and daily alarms can be setup. You can setup an alarm window with a custom message that’s displayed after the alarm goes off. There are half a dozen alarm melodies to choose from, or you can set your own (with cropping and looping). Alternatively you can also set applications to launch and shutdown the PC once the alarm goes off.

Also have a look at Free Alarm Clock Software For Windows. 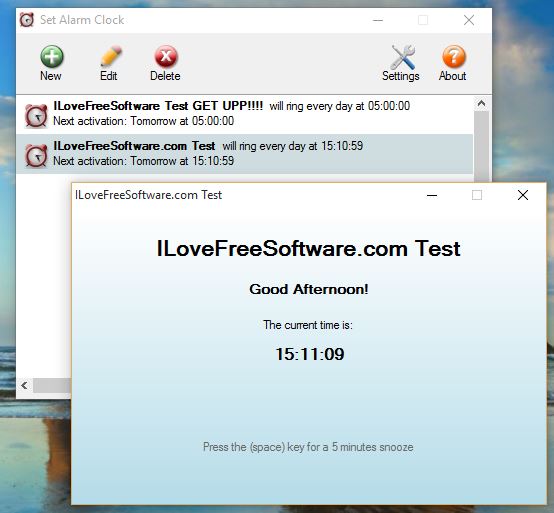 Set Alarm Clock is a more simplistic PC alarm clock software for Windows 10. Its interface is much more lighter, as you can see from the screenshot above. The only options in the toolbar up top are for setting a new alarm, or editing/deleting existing ones.

Settings are there just for tweaking alarm/snooze duration. When setting up the alarm you can set the usual, alarm title (acts as a message also), time, days when the alarm goes off (if it needs to be repeated), melody, looping and that’s about it. Image above also shows how the alarm message window looks like once the alarm goes off. Set Alarm Clock sits in the system tray for quicker access. 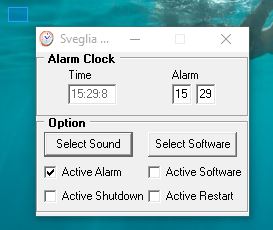 If you need a bit more more simplicity when it comes to PC alarm clock software I don’t think it can get any more simpler than Sveglia.

Sveglia is a compact alarm clock software with a surprising number of more advanced features. I’m talking about things like launching applications with the alarm, or shutting down/restarting the PC. Setup is pretty straightforward. First enter the hours and minutes for the alarm in the two “Alarm” boxes in top right corner of the compact interface. Next use the options down below to choose what actions you want triggered, put check marks next to them and you’re done. While running, Sveglia can be accessed from the system tray.

Also have a look at Windows Alarm Clock with Recurring Alarm, Use Own Music. 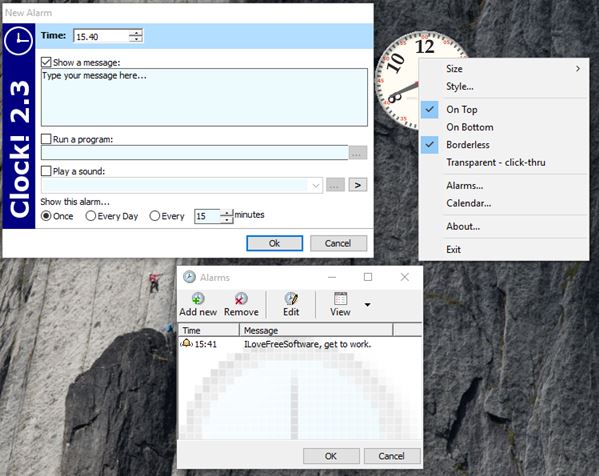 Just like it is the case with ClockX, Clock! isn’t marketed as a PC alarm clock software for Windows 10. It’s actually a full on clock software, with a themeable analog clock for the desktop.

Multiple alarms can be setup and the alarm setup is again accessed by right clicking on the clock itself and selecting “Alarms” from the right click context menu. Alarm manager will pop-up, after which you need to click on the “Add new” button to start adding new alarms. Usual options are available, daily repeats, custom melody, launch program on alarm, etc. You can see Clock! in action on the image above.

Each one of the 5 PC alarm clock software for Windows 10 from the list above worked great. I really enjoyed the features offered by Free Alarm Clock and the simplicity of Set Alarm Clock and Sveglia. Let me know what you think by dropping a comment down below.