goTenna is an amazing new technological innovation that lets you send text messages without any network. Basically, goTenna is a small transceiver (it both transmits and receives) that your smartphone can latch on to via BluetoothLE connectivity. It creates a sort of temporary radio network that can be used to send information like text messages, location etc. (through dedicated iOS and Android apps) to other goTennas via long range radio waves. When this information is captured on the other end by the receiving goTenna, the reverse of this process happens, and the receiver goTenna forwards the information (text messages, location etc.) to the smartphone it’s paired with. Apart from that, goTenna has a couple of other goodies as well. Sounds pretty freakin’ awesome, doesn’t it? Let’s find out more.

What Exactly Is goTenna?

In the simplest of words, goTenna is a terrific hardware/software combination that rids you of the frustration of being unable to get in touch with others due to lack of network coverage, by giving you your own network. Yeah, you read that right! The hardware part consists of the namesake goTenna device, a small wireless device that pairs up with a smartphone (iOS or Android) via Bluetooth connectivity (provided both devices are within 20 feet distance of each other). This device is used in conjunction with the software part, which includes goTenna’s own iOS and Android smartphone messaging apps. These apps serve as both the message transmission and receiving user front-end.

How goTenna Is Able To Send Text Messages Without Any Network?

Under the hood, the technology that’s employed by goTenna to send and receive messages (and location info) is quite intricate. However, the steps mentioned below should give you a fairly clear understanding of goTenna’s magic.

Note: First and foremost, it’s important to know is that goTenna works in pairs. This means that for your friend to be able to receive a message from a goTenna device, he/she needs to have a similar device paired with his/her smartphone as well.

That’s all there’s to it! And even though it may seem like the opposite, all of this mumbo-jumbo takes place in milliseconds. How cool is that? Here’s a simple graphic, illustrating the above mentioned process: 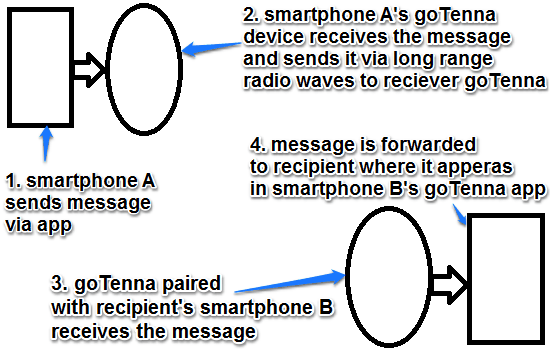 Obviously, the smartphone apps (for iOS and Android) that work in conjunction with the goTenna transceiver device form an integral part of this experience. However, apart from being able to send/receive messages sans network connectivity, the goTenna smartphone apps also have a couple of other features as well. Here’s a lowdown:

Some Important Points To Note

goTenna is an incredible technology that blends in hardware and software to let you send text messages without any network. It can be really useful when you’re going with friends to a place with unreliable cellular connectivity, always making sure that important messages get delivered, no matter what. goTenna thus truly does what it says, and that is to make no service, no problem.

What do you think about goTenna? Let me know your thoughts in the comments section below.