ExploitShield is an anti-exploit utility which you can use in order to protect yourself from exploits that could infect PC with malware, even without you giving permission to install anything, which is how malicious code tends to operate.

Very popular way of how infections are being spread is with the help of the so called Java drive-by attacks, when various different tricks are used so that virus is installed to your system without you even knowing about it. ExploitShield can help you out and protect you against such attacks. 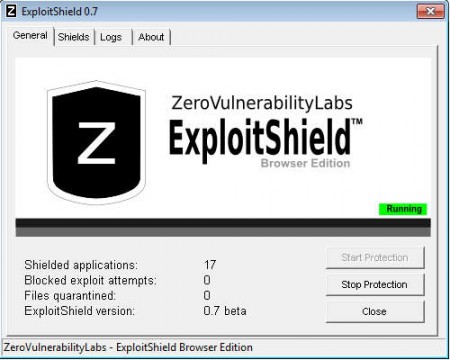 Browsers are not the only set of applications which are supported and where exploits can be blocked; you can also prevent infections caused by exploits on Adobe products like Flash, Acrobat, Microsoft’s Office, and Windows Media Player. All of these applications are known for having vulnerabilities which can, if you’re running them, cause your systems defenses to be breached and for you to become infected with malware.

Key features of ExploitShied are:

Even though ExploitShiled can be used with other applications, browsers are where it can come in handy the most. Websites are a very popular method that hackers use in order to take advantages of various exploits in plugins, addons and codecs that we have installed into our browser for viewing multimedia and for example view PDF files.

How to use ExploitShield: Free Exploit Detection and Protection:

Like we already mentioned before, you don’t have to go though any kind of special configuration in order to use ExploitShield. The application is gonna run in the system tray and there it will monitor if you run a protected application. 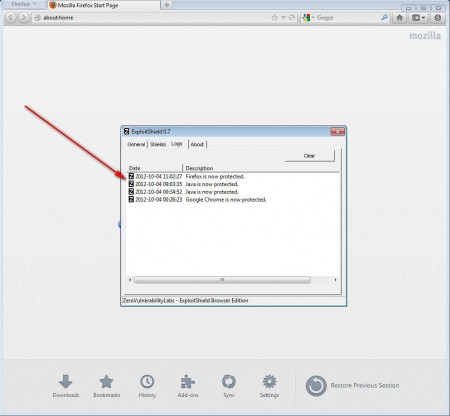 Double clicking on the tray icon is gonna open up the main application window, which can be seen on the image above. The only thing that you can do is open up the Logs tab to check on the status of the exploit protection. Each time that you access a website that tries to forcefully install something or infect your computer, you’re gonna see a report of it not only in the Logs tab, but also in the form of a pop-up window. 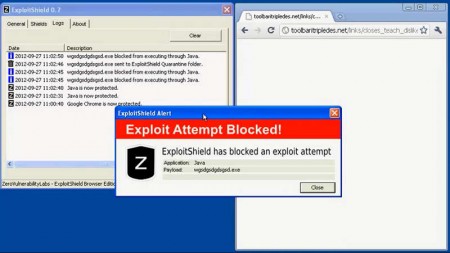 This is how you’ll be notified that an exploit has been blocked by ExploitShield, name of the .exe or in other words the virus which has tried to install itself onto your computer is also gonna be detected.

Of course, Exploit Shield is not a replacement for an antivirus, so make sure you have a good free antivirus also installed.

This small and very lightweight exploit shield is gonna protect you from all kinds of dangers which exist out there. Drive-by infections are on the rise, and if you do not know how to protect yourself from them, then this exploit protector is just the thing for you. While in testing ExploitShield is free, try it and see how it goes. Free download.