Now those who have Windows 7 on their system might be thinking what’s the point in using a separate tool when they can already preview minimized windows in taskbar by hovering the mouse pointer on them. Well that’s true, but that way, you can not preview them all together, which is possible with miniMIZE. You might also check out Taskbar Thumbnails Tuner to customize taskbar thumbnails in Windows 7. 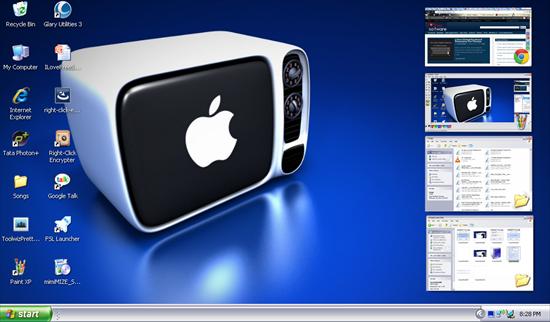 miniMIZE also provides a set of customization options that lets you adjust the thumbnail size, opacity, and their position on screen. Apart from that, you can also add Exclusions, if you don’t want certain applications to work with miniMIZE. Use the link given at the end to grab this free desktop enhancement tool for your Windows system.

miniMIZE is quite simple in approach and a handy tool to use. Once you launch it, it will integrate to your system tray and become active. Now from this point onwards, whichever active window you minimize will be minimized to a thumbnail on desktop. You can double-click on these thumbnails to restore the windows back to full screen.

Now there are two main things to be noticed here. One, when you minimize all open applications to thumbnails and maximize one of them again, you will loose track of other windows since their thumbnails are hidden behind the current window and taskbar icons doesn’t exists in this case.

As a solution, you can open the minimize Settings window by right clicking on its tray icon and uncheck the Hide Taskbar Buttons option. 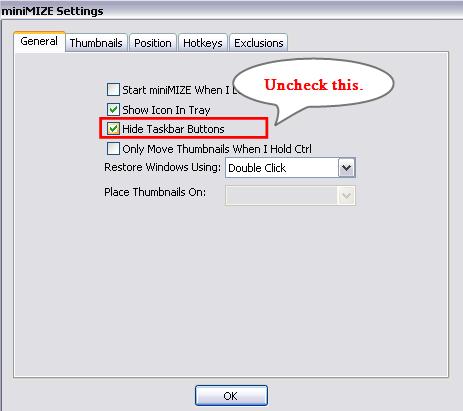 Or you can also press and hold ALT key, and press TAB key to view the icon list of all active windows. If you want to maximize another window, you can keep pressing TAB until you reach the desired window and release both the keys to maximize it to full screen.

Another thing is, if you have too many windows opened on your desktop, miniMIZE will fill your entire desktop with lots of thumbnails if you minimize all of them. Though there’s no specific solution to this, you can try resizing the thumbnails to a size which you think would be optimum and reposition them to a specific area on the screen, such as to the right side of your desktop. These options can be found, again in the miniMIZE Settings window. 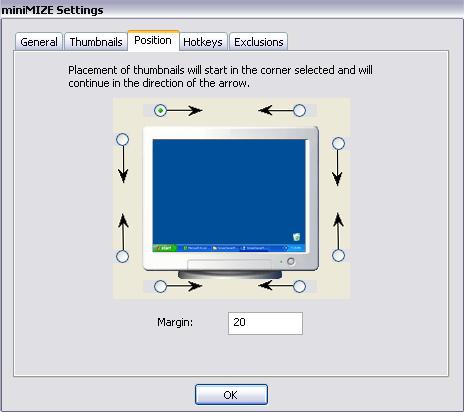 miniMIZE is a nice free desktop enhancement tool to minimize active windows as thumbnails, and quickly open the desired one by visual reorganization. Though it is not appropriate for everyone, especially those who usually have a cluttered-up desktop; for some, it could be of great use. Give it a try and see if it suits your needs.