The freshly baked Windows 10 includes more goodies than you can count, and multiple desktops are one of the most important of them. The feature lets you create nearly unlimited virtual desktops for handling different kinds of work. And while it’s easy to jump between the applications running on different desktops via the taskbar, what if you could do it even faster?

As it turns out, you indeed can, and that too with the well known Alt+Tab keyboard shortcut. Stoked already? Jump over to the other side of the break to find out how to use alt+tab to switch between applications across desktops in Windows 10.

How To Use Alt+Tab To Switch Between Applications Across Desktops In Windows 10?

Switching between the applications open on different multiple desktops using the well known Alt+Tab keyboard shortcut is pretty straightforward. Just tinker with a few settings, and you’re done. Mentioned below is an illustrative step by step tutorial, explaining how to get things started:

Step 1: Open up the modern style Settings app, and click on the System sub-module. 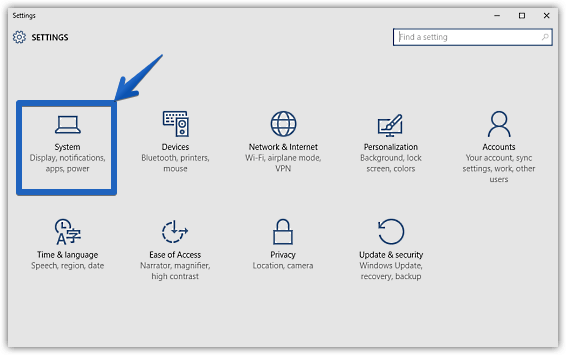 Step 2: A couple of options should now be displayed on the left. From these, click on Multitasking, and jump to the right. Go to the Virtual desktops sub-section, and change the setting of the Pressing Alt+Tab shows windows that are open on to All Desktops. Here’s a graphic: 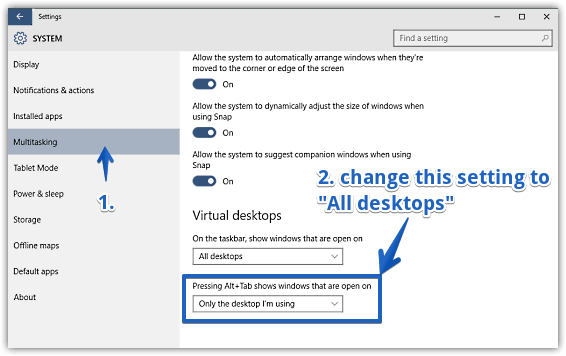 That’s it fellas. Going forward, you’ll be able to use the good ol’ Alt+Tab keyboard shortcut for effortlessly switching between the applications open on multiple virtual desktops. Can’t get any easier than that, right?

See Also: How To Create Multiple Desktops In Windows 10

Multiple desktops are amongst the coolest features of Windows 10. And the fact that you can juggle between applications open on different multiple desktops via the well known Alt+Tab keyboard shortcut, makes using them even more fun. Give it a shot, and let me know your thoughts in the comments section below.