Hemingway is an awesome free web based minimal text editor that lets you write in a more clear, understandable and  unambiguous way. It achieves this by highlighting the errors in words, sentences, grammatical structure etc., of your writing and suggesting improvements in real-time. There are different color coded highlights for different types of errors. For example, if a sentence is excessively long, it’s highlighted in Yellow. Similarly, if a sentence is so complicated and dense that its entire structure and underlying logic is lost, it’s highlighted in Red. Apart from sentence structure, Hemingway also offers suggestions about things like replacing a complex word with a simpler one, replacing passive voice with active voice etc. Apart from that, Hemingway also keeps a real-time updated count of the total number of characters, paragraphs, and words that you type. Sounds interesting, right? Head past the break to find out more.

Hemingway is pretty minimalistic and extremely straightforward to use. There are no accounts, no sign-ups, nothing. All you have to do is just go to the homepage and start doing your thing. Here’s a screenshot of its main user interface: 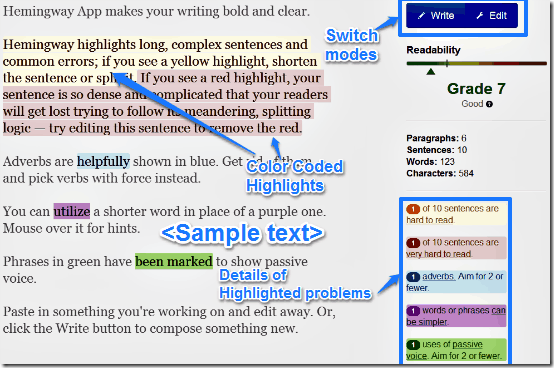 Apart from this, a section in the right corner also lists the meaning of these color coded highlights, and maintains an individual count of the highlighted issues as well. If you want a little bit more control, you can switch the highlighting for different elements (adverbs, passive voice etc.) on/off. To do that, simply hover over an individual highlighted issue’s listing and flip the virtual toggle to Off position. Check out the screenshot below: 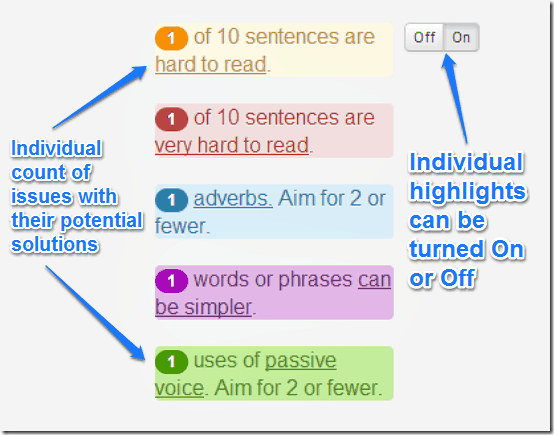 If you don’t want all these additional feature and just want simple online distraction free writing editors, you can try this, this, or this.

Although Hemingway’s minimal user interface consists of the text editing area, it also has a few other goodies as well. Check out the screenshot below: 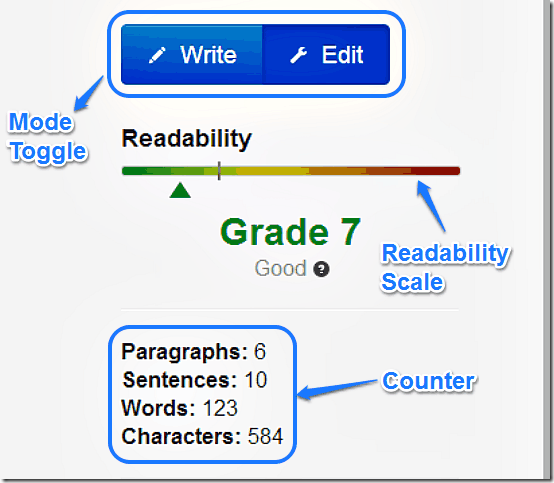 As illustrated above, the right pane consists of a number of useful UI elements. These are briefly mentioned below:

How to write/edit in Hemingway?

It’s really simple. If you just want to write and then see Hemingway’s highlighted suggestions, select Write from the mode toggle and start typing away. However, if you wish to see the highlighted revisions in real-time, you can simply start typing in the default Edit mode. Here’s a little animated graphic:

Hemingway is an amazing web application that lets you draft clear and understandable write-ups. It’s a must use for everyone who wants to write efficiently, using a language that’s simple yet easy to understand. And if that’s not enough, there are features like readability scale, real-time counter, and of course, color coded highlights that let you become even better at writing. I suggest you do give this thing a try, it’s amazing.