Twitter is at it, again. The 160 character micro blogging social network, that’s always tinkering with its interface, has rolled out yet another major update. Announced on its official blog just a few hours back, Twitter’s redesigned profile pages are rolling now, live for everyone. The Twitter profile page redesign also brings with it a Timeline like view of tweets, ability to pin a tweet to the top. You can also filter tweets for any user to see only the tweets that you like. And also see when you followed a particular user.

Excited to see the changes? I’m sure you are. Head past the break to find out. 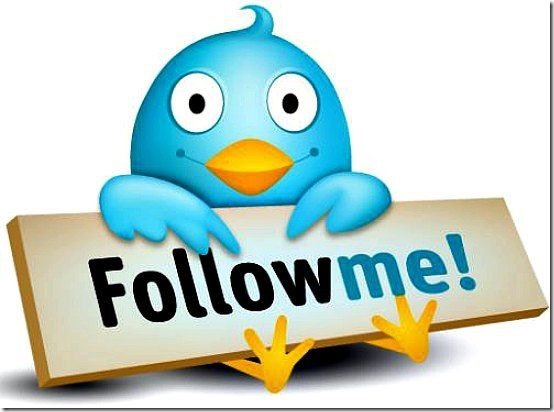 It’s easy to get your new profile page on Twitter. Just log in to your Twitter account, and you’ll see a big notification up top, inviting you to try out the redesign. Just click on the big button saying “Take a Look!” 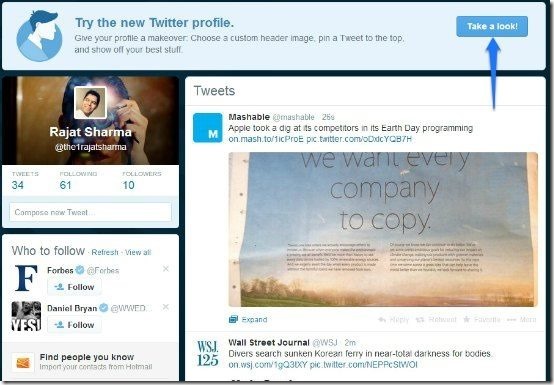 That’s right. Once your new profile page goes live and you glance it for the first time, you’ll see instant resemblance to Facebook’s profile pages. The profile photo, the expanded full width header image etc., all reek of similarity to Facebook. The redesigned profile page features personal information, like your Twitter bio and profile photo to the left. The central column features all of your tweets (and re-tweets) in a continuous vertically scrollable list (pretty much like before), and the right side consists of Twitter recommendations for you to follow. Take a look at the following screenshot:

This latest update to Twitter, while largely being about the massive redesign of the profile pages, also introduces a few features. Here’s the list of all that’s new:

Scrolling down vertically through your tweets now also shows when you started following certain users (and also shows mini profiles of one or two of them), pretty much like Facebook’s timeline feature. Check out the following animated graphic:

Mark a Tweet as Favorite and Pin it to Top:

If you have a favorite tweet of yours, one that you particularly like, you can pin it to the top of your profile. The pinned tweet always appears at the top, above all other tweets (and re-tweets), and is also much more prominent than the others. Pinning a tweet to the top is really easy. Here’s how to do it:

Step 2: A pop up asks you to confirm your choice, also warning that this action will replace any previously pinned tweet. Just hit Pin.

That’s it! After this, just refresh your profile page, and your pinned tweet appears at the top. As I mentioned before, pinned tweet is much more prominent and features bigger text than other tweets.

To remove a pinned tweet, follow the same procedure as above, only this time, select Unpin from your profile page.

You can now view filtered tweets while visiting others’ profiles. You can choose from: Tweets, Tweets with Photos/Videos,  and Tweets & Replies.

Social Networks are one of the most popular reason majority of the people use the Internet these days. Twitter’s latest redesign seems like a move aimed at capturing some of the users’ attention from competing services, most notably Facebook. Twitter is hugely popular as such, but its 160 character limitation is still a kind-of limitation. With the redesign, Twitter also seems to be hoping to make the user profile pages more personal. How much this benefits Twitter, however, is something that only time will tell.