LaunchCode is a free iPhone app to launch apps and other actions by drawing gestures. It lets you draw custom symbols and assign different apps and actions in order to access them quickly. You might have used many other iPhone apps that support gestures such as Beat-Music Player, RubCam, or myTunz, but “LaunchCode” is quite distinct as the only purpose of this app is to enhance multi-tasking. All you have to do is draw gestures and you will be able to launch apps, settings or tasks. For example, no more scrolling through all the phone numbers to call a particular person, as this app allows you to do so only by drawing a character or symbol.

Let us talk about the features of this app. It lets you create two shortcuts with gestures, one is “App Shortcuts” and another one is “Go Shortcuts”. The App Shortcuts are used to launch different apps, whereas the Go Shortcuts can be used to dial numbers, type messages, etc. There are tons of other features available such as you can schedule app launch, get a warning when you try to add an existing gesture, control sensitivity of drawing gestures, and much more.

The following screenshot shows the added shortcuts and the pad for drawing gestures. 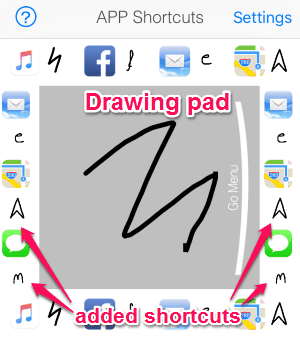 Just by drawing gestures on a pad, you can browse websites, change device settings, dial phone numbers, navigate map routes, access social network apps, etc. One of the interesting features of this app is that it comes with a widget on the notification center. That means if you don’t want to open the app and draw gestures, then you can simply slide the notification center to launch assigned apps.

How to Launch Apps with Gestures:

You can download and install the app from the link given at the end of this post or from the App Store.

How to add shortcuts with gestures:

After you open the app, simply tap the settings option on the right top of the screen to add shortcuts. You can either add “App Shortcuts” or “Go Shortcuts”. Select the “Add Shortcut” option and choose your favorite app for quick access. It lets you add custom gesture, change icon, and schedule app launch. Control the sensitivity of drawing gestures using the “Sensitivity Settings” option. The following screenshot shows how to add shortcuts with gestures. 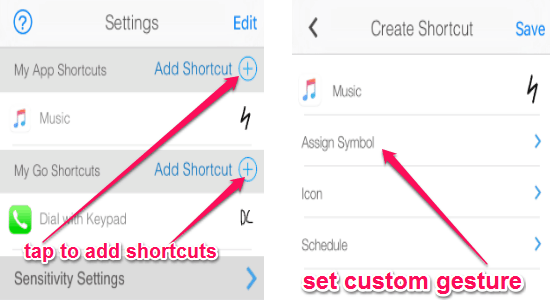 How to launch the “App Shortcuts” with gestures:

As soon as you open the app, the first screen is for “App Shortcuts” with a pad for drawing gestures. Tap the pad and draw gestures for launching assigned apps. After you draw a wrong gesture, the app will simply ask you to try again. So for quick access to different apps, you can use this interesting app. The following screenshot shows how to launch apps by drawing gestures. 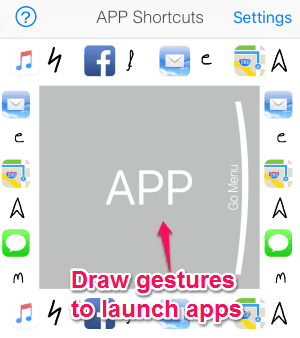 How to launch the “Go Shortcuts” with gestures:

The next screen is for “Go Shortcuts” from where you can dial phone numbers, open messengers, send email, etc. You have to follow the same above procedure to draw gestures and launch different assigned actions. Personally, I think this feature is very useful. For example, you want to call your best friend whose name starts with the letter “A”, then assign a gesture by drawing “A” for speed dial. The following screenshot shows how to execute different actions with gestures. 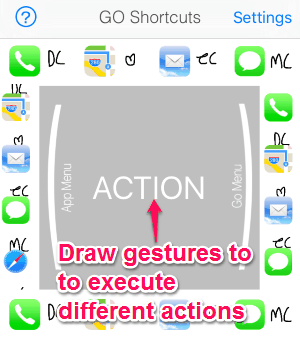 Honestly, I think “LaunchCode” is probably one of the best and useful apps for iPhone. You can easily launch your favorite apps and actions without going through all the long lists and just by drawing simple gestures. Draw custom gestures such as numbers, characters, or symbols and assign different apps and actions for quick access.