All iPad users till now did not have an option to create a new photo album on iPad until the release of iOS 5. People using iPad extensively for everything also keep photos of numerous happy moments stored in the iPad. If you are taking pictures from your iPad, then all the pictures keep on adding to the default “Camera Roll” folder. As all the photos are together, it becomes very difficult for you to sort the photos and find photos of a specific occasion.

Here is how to create a new photo album on iPad:

Step 1:  Click on the “Photos” icon on the main screen at the bottom of your iPad. You will see a default photo album “Camera Roll”.

Step 2: Click on “Edit” option at the right top of the iPad and then click on “New album” which appears at the left top after clicking on Edit option. 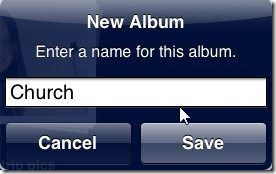 Step 4: Add your desired photos in the new created album and then click on “Done” option on the top right of the screen.

You can also check out Adobe Photoshop Express to edit photos on iPad reviewed by us.

That is it, you have just organized your pictures into albums. Now you are ready to view the albums of your choice. This makes your view easy, presentable and nice too. Now you don’t have to worry about searching for a photo among the thousands. Just click the album you stored the photo in and there it will be. iOS 5 makes this task to create a new photo album on iPad or iPhone a piece of cake. Go ahead and organize your photos.