Here’s a list of 5 wifi scheduler apps for Android which you can use to schedule wifi activity so that it’s turned off during the night and then again activated in the morning, before you wake up. You can probably see how something like this might come in handy. It can help out with battery life or just make sure that you’re not disturbed when working. Apps that I listed down below automatically turn off/on the wifi according to schedules that you setup. Everything is easy and has relatively straightforward setup.

Let’s see how exactly do these app work. 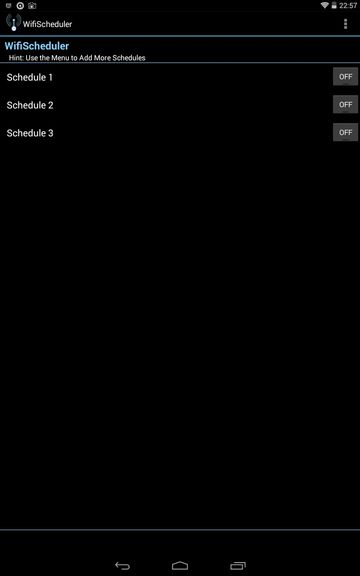 This is the schedule manager, where the switches can be setup. They can either be a turn wifi on switch, or turn wifi off switch. I have 2 setup. One to turn off the wifi at 10pm and another one to turn it back on at 6am. The ON/OFF toggles on the side are for activating and deactivating switches.

Get WiFi Scheduler by McMeel. 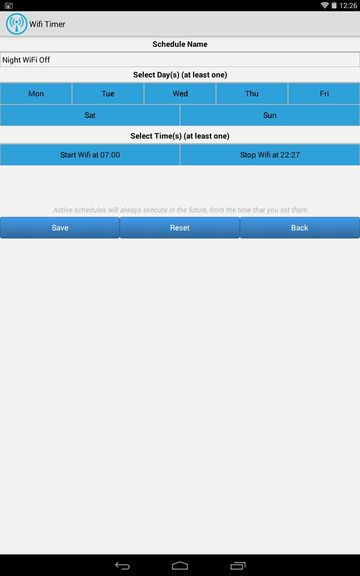 Wifi Timer works a bit differently from WiFi Scheduler. What Wifi Timer has are profiles, where a single profile can at the same time be used to turn wifi off and then again to turn it back on.

Entire setup can be seen on the screenshot above. It’s very similar to setting up an alarm. Give the profile a name, then select the days of week you want the profile to be active. Last step requires you to select the start and stop times for the wifi. When you’re done, click Save to activate the profile.

Also, have a look at 3 Internet Lock Apps For Android. 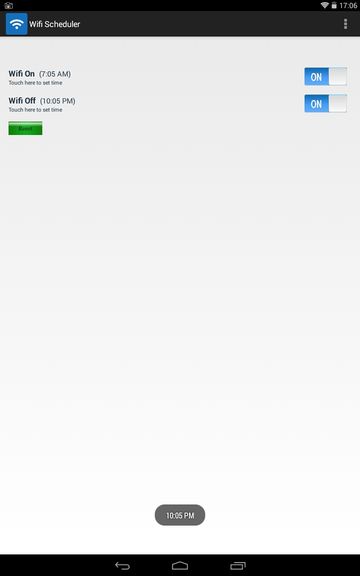 Wifi Scheduler by Puneet is a very simple wifi scheduler app, which only supports 1 set of wifi on/off switches, as you can see on the image above.

When you finish with the setup, make sure to turn on that particular switch by taping on the button on the right. This is the same as WiFi Scheduler by McMeel, only it lacks the ability to add additional wifi switches.

Get Wifi Scheduler by Puneet. 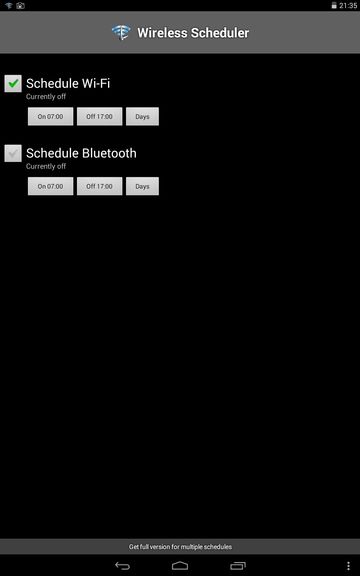 Wireless Scheduler Lite also limits the number of schedules that can be setup to just 1, at least in the lite version it does.

Unlike other WiFi scheduler apps that I covered, Wireless Scheduler Lite also has support for scheduled management of Bluetooth. Only 1 Bluetooth schedule can be setup, the same way that only 1 WiFi schedule is supported.

Also, have a look at Automatically Turn Wifi On or Off in Android Without Using GPS. 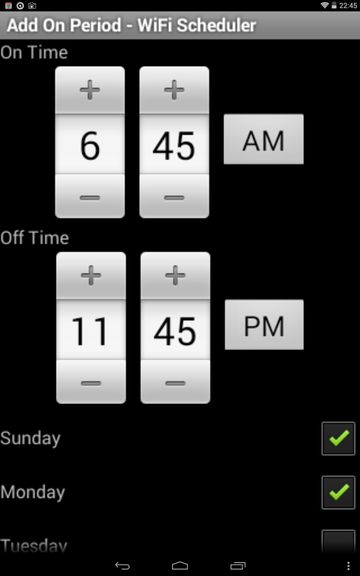 WiFi Scheduler by Raging Software doesn’t have any kind of restrictions when it comes to the number of off/on wifi profiles that can be setup.

Setup is also very easy. First activate the wifi scheduler and then start adding wifi schedules. A single schedule profile can have both off and on switches.

Get WiFi Scheduler by Raging Software.

I suggest that you take a look at WiFi Scheduler by Raging Software first and then move to Wifi Timer. Both of these are easy to use and they allow you to setup multiple wifi schedules. As always, leave comments down below telling me what you think.