Flippr is a free Android app which lets you access widgets from anywhere on your Android smartphone. Widgets are one of those elements of Android OS which make it cooler and stand apart from other smartphone OS out there. Widgets are like shortcuts which let you see data from different apps, without launching them. The only flaw about them is that you can’t access them from anywhere and you have to minimize the app on which you are working on, then swipe across all apps to go to Widget screen. It can prove to be really awful when you are watching a video, playing a game, or working on some full screen app as you will have to leave the app in middle.

The Flippr app helps you from this problem, and that too quite effectively. This app lets you access any of your widgets from any app without leaving it. For example, you are working on some document on your Android smartphone and you need to use calculator app widget. Then you don’t have to leave the document viewer app. Just use Flippr, calculate what you want to calculate even without leaving the app. This app also lets you group widgets in different groups and then customize them as per your preference like their size, appearance, etc.. 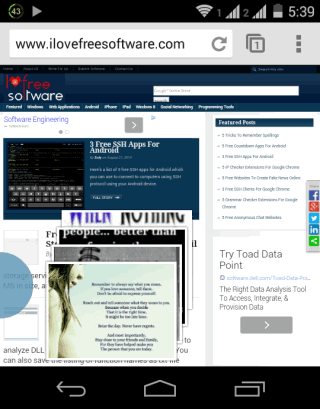 Note: Free version of Flippr app lets you make 2 groups with 3 widgets each. It means you can access up to 6 widgets in free version. For removing this limitation and access more advanced feature, you need to upgrade to PRO version of the app.

Using this Android App to Access Widgets from Anywhere:

Launch Flippr app to go to app’s home screen. The home screen of the app is the interface where you will see all the widget groups made by you. It will be blank if you are using it for the first time. You have to tap on plus icon at top right corner to make your first group. Tap on it and give any name to your group. It can be anything as per your choice like Media, Social, News, Productivity, etc.. You can create as many groups as you want by repeating the step (limit of 2 in free version). 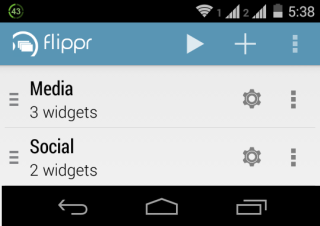 If you want to re-order groups, then you can do so easily by tapping and then dragging the group up-down. For adding widgets to group, tap on Gear icon. From next interface, tap on plus icon at top right corner to get a list of all the widgets available on your Android smartphone. Tap on the one which you want to add. You can also configure widget if it supports such feature. This way, you can add multiple widgets (limit of 3 in free version) in a single group. The process for re-ordering widgets is similar to that of groups. If you want to remove any widget, then tap on three dot icon in front of widget. 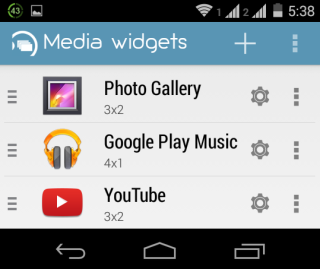 When you have made groups and added widgets to them, you can start using Flippr app. To start the app, tap on Play icon at top from the app’s home screen. On tapping it, you will see a circular icon on left side of the screen. It is known as the Marker. 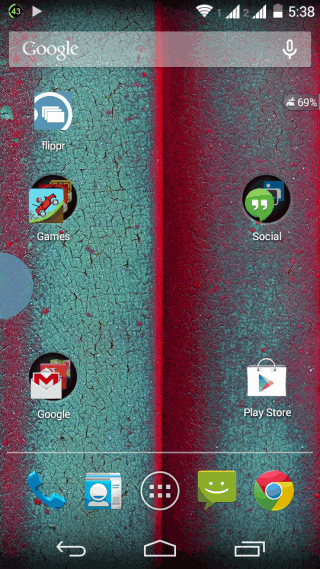 Also see: Floating Menu For Android That Stays on Top Of All Apps: Floating Toucher

Apart from this, you can also change different preferences for the Flippr app. To change preferences, tap on three dot icon at top right corner from app’s home screen and choose Preferences. From here, you can configure various things like enable Flippr on boot, display Flippr icon at top when using, adjust number of rows/columns, marker position, and marker size. There are a few more preferences which you adjust from here. 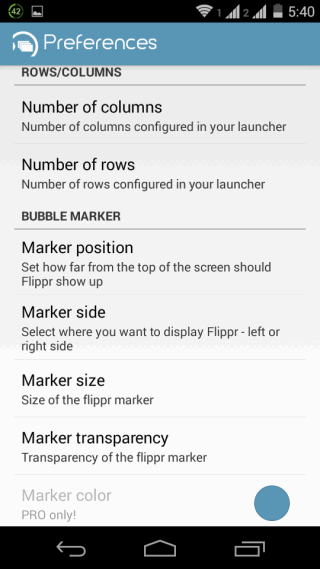 You may also like: Add Multiple Countdown Widgets to Home Screen Of Android.

Flippr is really an awesome Android app to access widgets from anywhere on Smartphone. I really liked the app as no matter which application I was using, I was able to access my widgets smoothly because of this app. If you are one of those Android users who use widgets frequently, the do go for this app.