I will cover two different Chrome extensions to fill Fake data in Forms:

As you may already know, for using most of the websites, you first need to fill Web forms to sign up, which is as boring as it can get. Fake Data and Form Filler are really good solutions for this problem.

FYI.. you can use Adobe Fill & Sign app to fill up PDF forms on iPhone and then digitally sign them.

Fake data is a simple Extension for Google Chrome that automatically fills text boxes of web forms with dummy data.

Once you have added this extension to Google Chrome, it’s icon appears in Chrome toolbar. From there you need to open Options of the extension and select the preferred language. It supports lot of different languages, including: English, German, French, Russian, Chinese, Slovakian, Dutch, Afrikaans, Spanish, Italian, Japanese, Swedish, Nepali, etc.

You can either choose Default to randomly fill the forms. Or, you can customize it by choosing Custom and entering JavaScript code for each of the field in the settings. 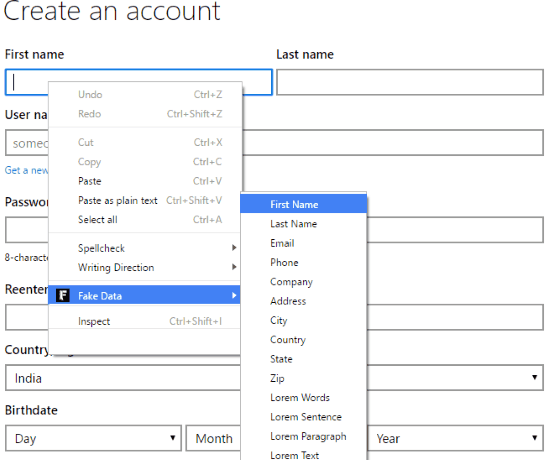 While using Fake Data for the first time, you will need to manually select each field type from the context menu to fill relevant text boxes. In future, Fake Data will automatically fill all the text boxes by using “Alt + double click“.

Form Filler is a very useful Chrome Extension to automatically fill web forms with random data. It not only fills text boxes but can also cover check boxes, radio buttons, drop downs, etc. It is also able to create a random password and repeat the password if asked. It saves a lot of time for developers who need to fill a lot of web forms to test websites.

Form Filler automatically fills all the fields of a form in a single go by simply using “Ctrl + Shift + F”. You can also use Form Filler from the context menu to fill a single field. 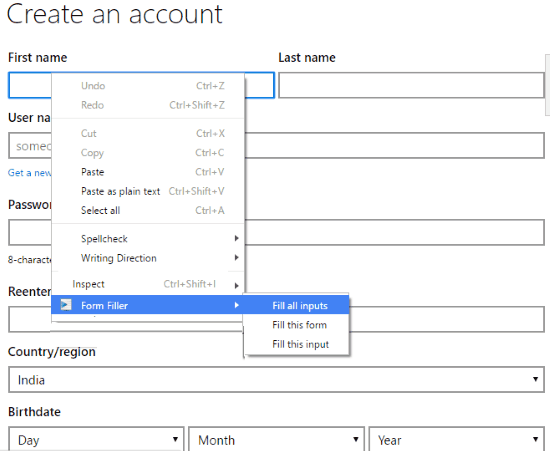 After adding Form Filler to Chrome, there is not much to be done. However you can customize all the field data after selecting Form Filler icon in toolbar and opening Options.

You can also create a backup of the setting at any time and download them to your PC. This backup can be imported from the PC to restore the setting.

Fake Data is simple Chrome Extension to fill text boxes of web forms one by one. This makes it’s use relatively limited in comparison to Form Filler, as Form Filler can fill all the fields in a single go, and supports a lot more field types (drop-downs, radio buttons, passwords, etc.). I would definitely prefer Form Filler over Fake Data.