HoverSnap is a free and portable screen capture tool that is used to take screenshots and allows to save captured screenshot in jpg, png, gif, and in bmp format. It also provides hotkeys to quickly capture an active window, full screen, or a custom area of desktop screen. Another useful feature present in HoverSnap is that you can resize capture height and width before taking a screenshot. This feature is not present in most of the other similar screen capture software.

Apart from this, HoverSnap also allows you to upload captured screenshots to a configured FTP server. You will need to provide login name and password to do so. HoverSnap is quite simple and basic screen capture tool but is better than default PrintScreen key which is used to capture only whole desktop screen. Once after capturing screenshot, HoverSnap will save it automatically to default destination location. Later on, you can open screenshot with any image editor software to edit and enhance it.

But here, one thing should be noted that if these hotkeys are already assigned with other program, than you won’t be able to capture screenshot. So this is the shortcoming with this screen capture tool that you cannot customize hotkeys.

Some Key Features Present In HoverSnap are: 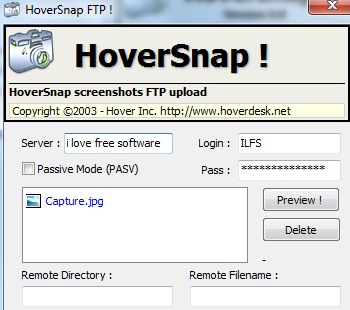 HoverSnap is a very simple and basic screen capture tool but can be useful to quickly capture desktop screen or a specific part of screen. However, there are more feature rich screen capture tool available that lets you edit and enhance screenshots with built-in image editors, like MakeShot, Monosnap, and Exacto. If you want to try HoverSnap, then hit the below link: