In its built-in image editor, multiple tools are available that help to make your screenshot even beautiful. It is also good to use for illustration purpose. You can use tools, like freehand pen, arrow with text, square highlighter, circle, add text, line, etc. 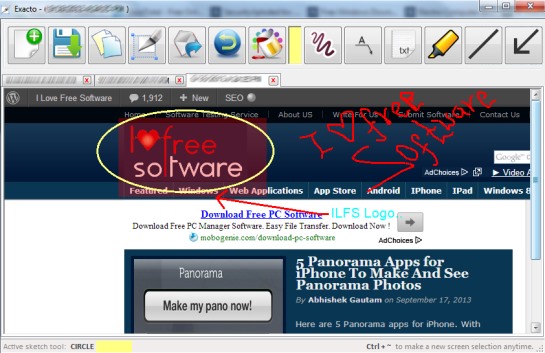 Above screenshot shows captured screenshot opened in Exacto’s built-in image editor. Once you will run Exacto, you will be able to capture a specific part of your desktop screen, like it is visible in below screenshot.

Immediately after selecting a specific area, screenshot will be captured and will open in image editor. Here, you will find all of the tools available on top part which you can use to enhance your screenshot. Some of the useful tools are: square highlighter which highlights a specific part, text tool to insert text, crop screenshot to paste in new tab, and freehand tool.

Enhance your screenshot and when you are ready to save it to PC, then click on Save button. After this, you can select the image format and can save captured screenshot. Moreover, to capture another screenshot, use make a ‘new screen selection’ button or simply press hotkey ‘Ctrl+~‘. Capture multiple screenshots and they will be available to use on different tabs.

Key Features Present In This Screen Capture Tool are: