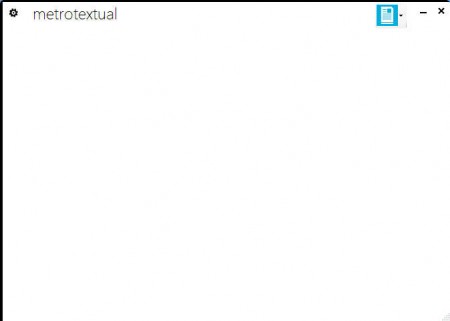 The overall theme of Metro Textual has a lot of similarities with the new UI style that Windows 8 has, window border looks the same, and there are no additional toolbars apart from the one that’s embedded into the window frame at the top. Spartan appearance of Metro Textual is exactly the same to the one of Windows 8, because majority of functionalities have been hidden and only the interface is visible now. Clicking on the gears icon in the top left corner of the window screen, you should see that there are some things that you can change, for example:

For some this won’t be enough, for example the very useful spell checks are not included and there are no tabs so if you want to have several documents opened at once, they’re gonna have to be opened inside their own windows, which means clutter in the taskbar. Since Metro Textual is a relatively new text editor, there’s still a lot more room to improvement, and we’re probably gonna see some of these advanced functions in a future release.

How to setup and edit text with Metro Textual 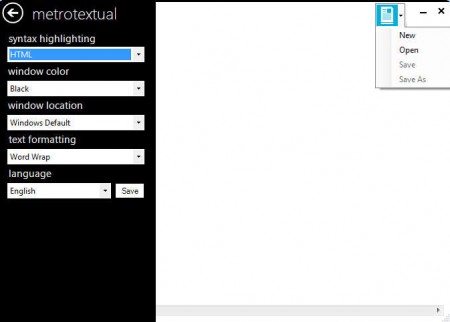 What you see on the image above are Metro Textual settings, they are opened in the left sidebar, while in the right top corner we have the basic file manipulation menu where you can open new documents, save existing ones or close the application completely. Left sidebar setting menu is where you’re gonna make the most changes. Most important ones would be that syntax highlighting for the type of code that you’re using, if you’re writing code with Metro Textual, and that you wrap text so that it doesn’t go on forever in a single line. Once you do that, all that’s left is to type away: 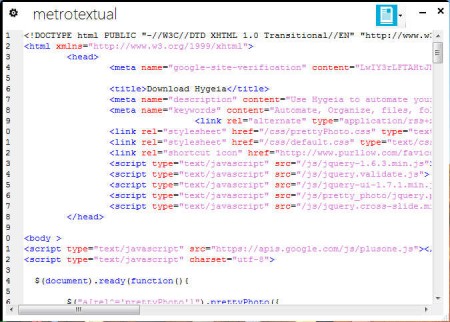 Even though it’s a bit simplistic Metro Textual does its job very well. Those who are interested in integration of their applications and the new user interface that Windows 8 has, they’re gonna find exactly that with Metro Textual. There aren’t that many text editors made specifically for Windows 8, the one that we tested here might even be the first, so make sure to give it a try and see how it goes, it’s free, so it doesn’t cost you anything to try it out.