Recordar is a free iPhone app to prepare to do list on iPhone. This app lets you manage all the to do’s for today, tomorrow, next week, and later. Also, this iPhone to do list app is works on iPhone, iPad, and iPod touch.

Recordar app is one the simplest to-do list app in Apple App Store which I found till now. You can record as many to do’s as you want. Apart from this, the app lets you record appointments, ideas, and projects. You can even add notes to every to do task which you have recorded in the app. This iPhone to do app makes your work easier by giving a reminder for all the task to do on a particular day. 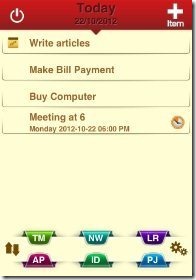 Also, when I scheduled an appointment, the app did not prompt me with a notification of the task reminder. However, the app did tell the exact date and time of the appointment.

To use this app, you need to check for all your recorded task on a regular basis. This is only a way to get the task reminder via Recordar app for iPhone.

As I have mentioned above that you cannot set an exact time of the task. Instead, you can you can just arrange your tasks in order of priority so that you know which one has to be completed first. This will help you to browse the task list and complete the tasks starting from the top and completing the task one by one.

Also check out our previously reviewed application An.Do app for iPhone to prepare to do list on iPhone.

How To Use This iPhone To Do List App?

For Android users, download and install Any.Do app for Android.

Click here to download and install Recordar app from Apple App Store. You can scan the QR Code below and get the direct download link of the app. 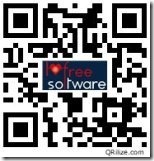 Recordar app lets you remember each task to do in a day. If you are the one who is habitual for forgetting things to do, then this iPhone to do list app is an apt solution for you.

If you are already using a better to do list solution on iPhone, do let us know in comments.