Minions The Dark City is a free Minions Game for Android with a game play similar to Angry Birds game. Little Minions from one of our favorite animation movie, Despicable Me, are here again to give us loads of fun in 20 exciting levels of this app. So, if you have already been playing Despicable Me Game App for Android, then you gotta try this one as well.

In this Android game app, you have to help the Minions kill purple monsters of the dark city. Simply point each Minion to shoot the monsters hiding behind settings of ice, wooden, and stone bricks. Get points by killing all the monsters and destroying the place where they hide. This game is very challenging. 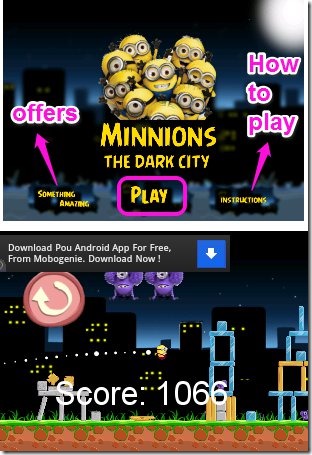 Some Features of this Minions Game for Android: 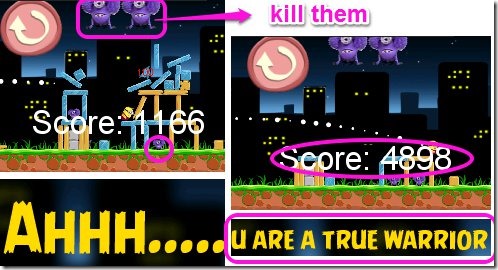 You can get this free Minions Game for Android by scanning the QR code given at the end of the page. You can also download it from Google Play store with the help of the link provided.

After the game is successfully installed on your Android device, launch it. You will get three options. You can click on ‘Play’ to start the game; tap on ‘Instructions’ to learn how to play this fun Minions game; or check ‘Something Amazing’ to get exciting offers.

The game play of this Minions game is similar to that of Angry Birds. You have to point Minions and shoot purple monsters. The game shows you instructions in the beginning about how to play this Minions game for Android.

The game has twenty fun-filled levels. All the levels are unlocked. So, you can select any level to play it. The initial levels are easy. As you choose higher levels, difficulty of the game will also increase.

Your aim in this free Android game is to kill all the purple monsters left in the level (shown on the top of the screen), with the help of these cute little Minions, and score as much as possible. 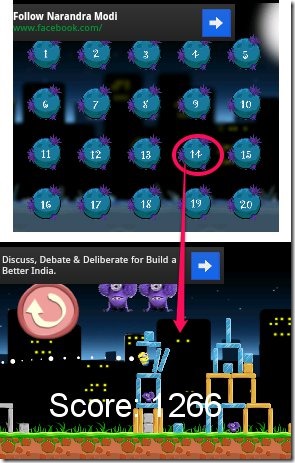 If you are a Windows 8 user, you can play Banana Wars, a free Windows 8 game reviewed on our website.

In my opinion, Minions: TheDarkCity is a nice app but with lots of scope for improvement. It has only twenty levels which are all unlocked from the beginning. The game shows points but once a level is cleared the points seem to be of no use as neither there is a need to unlock the next level, nor the app keeps the record of the points we gain.

The app would be more interesting if some locked bonus levels and atleast a best score sheet is added. Also, it would be nice if we are able to play the game easily on small screens too. But overall its a fun app.

Get Minions: The Dark City game app for Android here or scan the QR code given below.