Banana Wars is a Windows 8 Minion game. In this game, you have to play the character of a minion whose lab has been infected with a number of different enemies. Your aim is to clear the lab of all the enemies. You also have to save the other minion friends of yours. Jump off the enemy that come in your way, or use the bananas to hit them.

The game uses awesome background music. There are many levels available to play. The game uses a leader board in which your score is published worldwide.

Banana Wars is freely available in the game category of the Windows store. 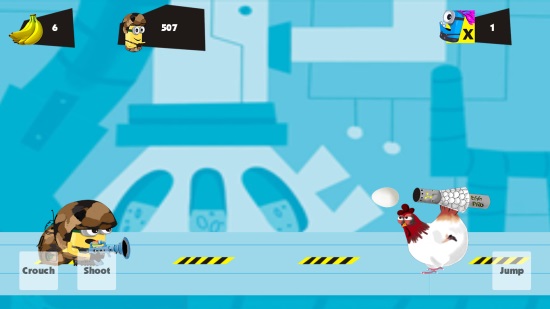 As you get to the game, the option to play it would be shown at the main screen, along with the How To option. Using the How to you would be able to find what the game is all about. 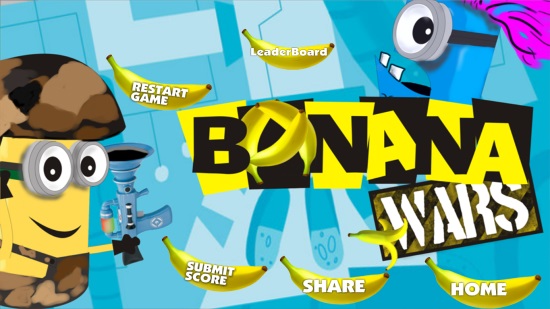 Let me give you some idea of the game:

In the game, you play the part of a minion who is on the special conquest to save his lab which has been infected. You also have to save your other minion friends. There are a number of enemies present in the lab. Hens will try to shoot you with their eggs, weird multi-legged robots are present. Rockets are also floating in the air. To escape the eggs and multi-legged robots you have to jump and shoot them with bananas. See that you don’t get hit by the rockets floating by. Sometimes bananas would come in the path. So see that you collect them because you can shoot by using these bananas.

The controls of the game are quite easy, You can use your key board to play. For that, simply use the arrow keys for moving the minions around. Use the Z key of your keyboard to shoot the bananas to kill the enemy. You can use the controls available on the screen to control the game with a mouse. The game works good on touch enabled devices.

About the game play

While playing, you have to keep in mind that you don’t touch the enemy by chance. This is because just a single touch would end the game. On the basis of the distance you have covered, score shall be given to you. Along with that, the number of bananas will be shown on the screen as well. The total number of other minion friends who you have saved would also be shown to you. 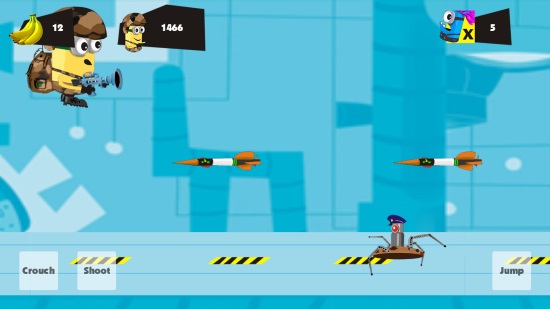 Banana Wars is quite a nice Windows 8 Minion game. You have to play as a minion, and have to save your friends. The game play of the game is quite nice. You can give it a try.