This tutorial will explain how to create anonymous poll in Slack. By default, there is no option in Slack to create anonymous polls and get votes from team members. But today, I have come across a simple method which you can use to easily create a poll and have people answer it anonymously in Slack. Actually, this can be achieved using a free Slack integration app called “Vote“. It allows you to create simple polls in any Slack channel or private group. After that, your team members will be able to vote anonymously. That means instead of seeing who voted, you will see the total number of votes and not the name of the voter. Apart from that, the team members will also not be able to know who created the poll.

There are some other Slack apps (like In or Out) which can be used to create polls, but the votes will not be anonymous and you can see who voted what. So, if you want to create anonymous polls in Slack then using “Vote” is probably the best option for you.

How to Create Anonymous Poll in Slack:

Step 1: First, you would need to integrate the “Vote” app with your Slack account. For this, simply visit the homepage of Vote and then click on the “Add to Slack” button. As soon as you do that, it will ask you to authorize this Slack app to access your account.

Step 2: When you’re done allowing access to this Slack app, you can start using it in any channel or private group to create anonymous polls. To create a poll, the first thing you would need to do is trigger the slash command of this Slack app. To do this, simply type “/vote” in the message field and then press “Space”. 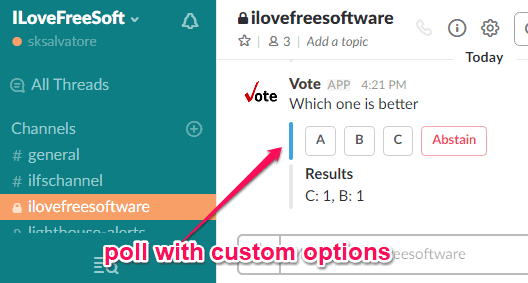 The “Vote” app for Slack makes it very simple and easy for you to create anonymous polls and get anonymous votes. Personally, I like it as apart from letting you create simple polls, you can also create polls with custom options. Go ahead and start getting opinions of your team on any question anonymously.