TweetDeck calls itself as a browser, but I would say it is a social networking application. Having said that, TweetDeck is really good at what it does. It basically lets you see all your twitter updates, direct replies to you, tweets from your friends, and even facebook updates in one window. 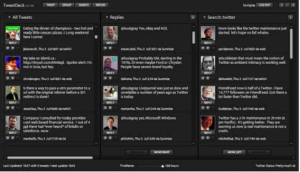 Some of the great features of TweetDeck are:

TweetDeck works with Windows, Mac OS, as well as Linux.

There are lots of other great features that this free software provides. I would advise you download it, and find those yourself.