Before getting started with the app, you need to sign-up with Shutterfly (for free). The folder albums which you create are uploaded on your account which you can access from anywhere when online. All the photos which you save in your Shutterfly account can be accessed and managed from anywhere and anytime. Let me explain you how Shutterfly is useful for iPad devices…

As I already said that Shutterfly is one of the popular photo sharing service to share photos online. One of the main reason why one should use Shutterfly service is its feature of  uploading unlimited number of photos to your Shutterfly account. You just have to go through a simple sign-up, and then you can start uploading your photos. Just pick the photos from your iPad photo gallery and save them all to your online Shutterfly storage.

Also, Shutterfly lets you access all the uploaded photos from anywhere. It has a desktop version and an online tool to access all your uploads anywhere and anytime. I focused on unlimited storage feature of Shutterfly service because most of the online storage services like Picasa, Dropbox provide limited storage.

Another reason why I like Shutterfly app for iPad is that it allows you to directly upload the photos from iPad. It is as simple as moving a photo from one folder to other in the photo gallery of your iPad.

Als check out photo sharing apps for iPad reviewed by us.

Shutterfly app can be downloaded and installed from App Store. Or, just use QR code below. 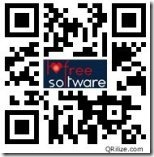