Here’s a list of 3 SSH apps for Android which you can use to connect to remote computers using the SSH protocol. People usually connect via SSH to their Linux computers or Linux powered web servers. An SSH connection allows you to take control of and issue commands via terminal to computer that you connect to. This computer can be on the same local network that you’re connected to, or it can alternatively be on the other part of the world connected via the internet.

JuiceSSH does everything you’d expect an SSH app for Android would do. It connects to computers, both locally (LAN) and remotely using SSH. A nice looking terminal is simulated, as it can be seen from the image down below. 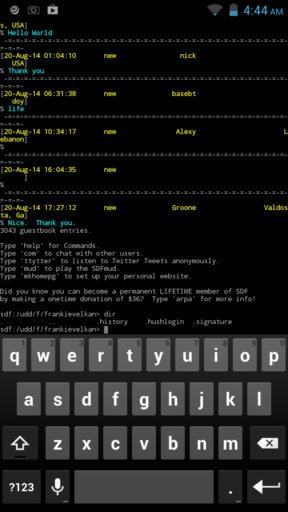 Before you see the black and white terminal though, you will see a connection setup window where you can setup the address and other important details about the computer that you’re connecting to. Password is asked once the connection is made. App adds additional controls to the default keyboards, most notably the up, down, left, right directional keys, home, end, and other keyboard buttons, which are missing from most default keyboards.

ConnectBot doesn’t have the kind of features or the interface that JuiceSSH has. This SSH app is much more simplistic, but it gets the job done. 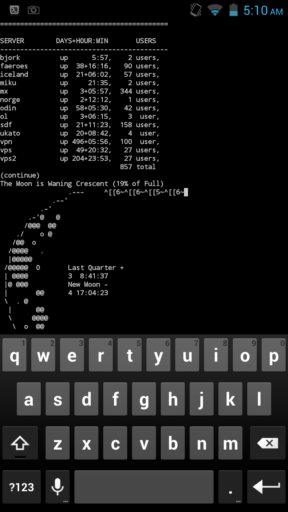 It can connect to other computers using SSH or Telnet. First thing that you will need to do is setup a connection to the remote computer that you want to connect to. Every setup connection is added to the quick list so that next time it’s not necessary to type out username and address. Password needs to be typed the first time that you’re establishing connection.

SSH Client looks and works a lot like ConnectBot. There are small differences in the interface design, but in every other aspect, from how the SSH connection is setup to how the machines that you’re connected to are controlled, are the same. 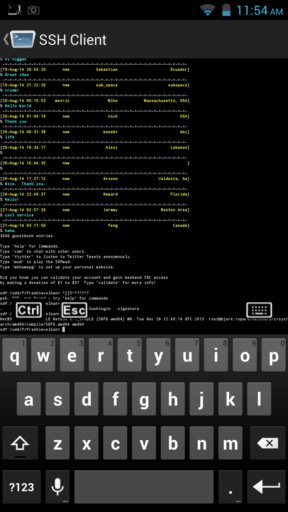 By tapping on the settings button of your Android phone, you’ll be able to change colors, and if you use the volume keys (volume up, volume down) you can zoom in and out on the terminal text. Each connection that you setup is automatically added to the list of used connections from where you can easily connect next time that you need it.

JuiceSSH impressed me the most, because it has the most easy going interface and the addition of the much needed keyboard buttons is a nice touch. The other two SSH apps mentioned on this list are also great, if you aren’t looking for the kind of advanced features that you get with JuiceSSH. Give them all a try and let me know what you think is the best app in comments down below.