Here’s a list of 4 free face swap apps for Android which you can use to tweak photos and switch faces on pictures of you, your friends, your family or you can venture out and use someone famous. I tested 5 apps which aren’t that difficult to use, but they are effective at creating very convincing face swaps. Most of the work is automated, app detects faces, and does the swap, but for best results you will have to get your hands dirty and tweak some stuff.

Let’s see how easy exactly it is to use these face swap apps. 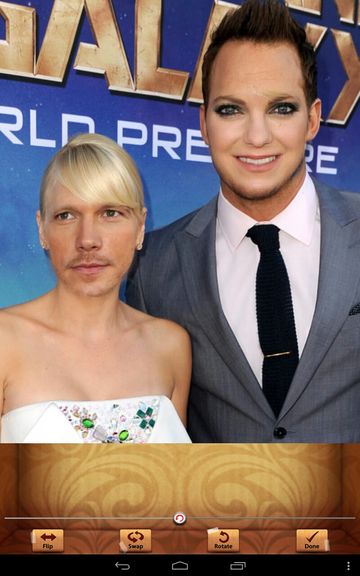 Face Swap by Axhunter takes pictures either from the gallery or it can load up the camera app to create new ones. Images have to have both persons who’s faces you want to swap in them.

Once you load up an image, app automatically detects faces but lets you tweak the selections if you want. Once you’re ready, tap on the “Swap” button will perform the swap, but you’re offered to additionally reposition the swapped face cutouts and to change their size, so they fit better. Once you’re ready you can make the changes permanent by saving the new image and sharing it via social networks.

Get Face Swap by Axhunter. 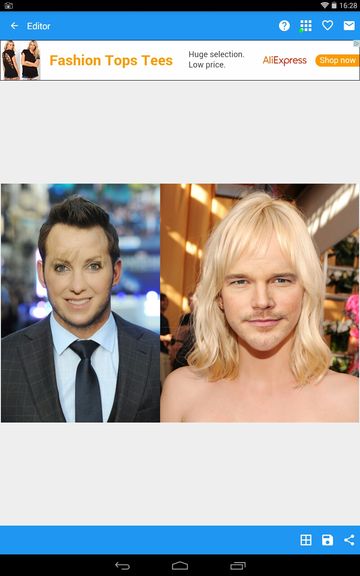 FaceSwap lets you load up individual photos which it then combines through face swap into a single image. This is great because you don’t have to have the people whose faces you want to swap in a single picture.

There’s a three step wizard for creating the face swap. First step is to load up the photos of people whose faces you want to swap. After that you need to make approximate face selection using a rectangular select too. Third and last step requires you to select the eyes, mouth and chin. These three steps have to be setup for each image. After that, tap on “Swap” and you’ll be presented with an image with the faces of the people you selected swapped, read for social media.

Also, have a look at Clone Faces in a Group Photo with Face Bomb for iPhone. 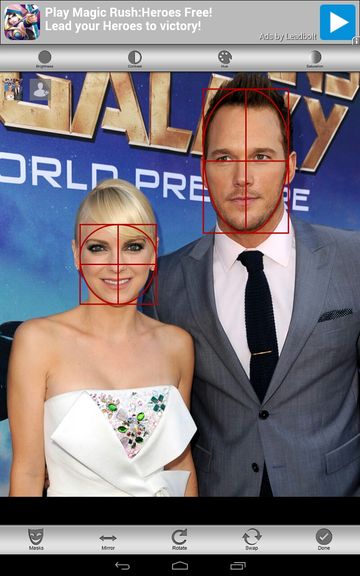 Face Swap Lite adds a couple of interesting options to the mix. What you see on the image above is the face swap setup, where face selections have to be made.

Both faces have to be on the same image if you want to swap them with Face Swap Lite. What makes it interesting though are the brightness, contrast, hue and saturation options at the top. They allow you to tweak the colors of the swapped faces to make them fit more. It’s useful if you’re swapping someone who’s pale with someone who has a bit more toned skin. 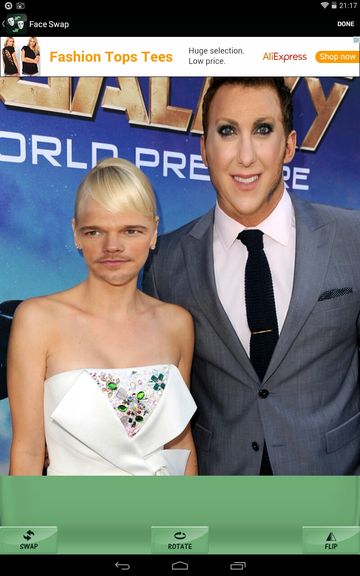 Face Swap by SpeedyGames can load images from gallery or create new ones with the camera app and load them like that. Faces are going to be automatically detected, but you can additionally make tweaks to the face selector.

Once both of the faces are selected, tap on the Swap button down below to swap the faces. Additional tweaks can be made to the swapped faces, before saving and sharing the finished product via social networks.

Get Face Swap by SpeedyGames.

Also, have a look at PixelSwapper: Free Photo Manipulation Software.

FaceSwap, the second app on the list of face swap apps above is my favorite. I like it because you can swap faces between 2 individual photos. There’s no need to have the people whose faces you want swapped on the same picture. Let me know which face swap app you use by leaving a comment down below.