As you might have noticed that people are suffering from major battery life problem in Android devices. The Android people are trying hard to solve the battery life issues, that’s why they are introducing new features such as Doze Mode in MarshMallow. The problem is that people who are using previous versions of Android can’t take advantage of this feature. But not anymore, as in this tutorial I will explain how to get Marshmallow Doze Mode on any Android device. Here comes a free Android app named “Doze” which emulates the Doze feature on any Android version (the app works with version 4.1 and above currently, but developers have said that they are working on to bring it to more versions).

It works quite similar to the Marshmallow’s Doze feature and after activation it snoozes device sensors and acts in the background. The only catch is that it emulates a VPN network on your device in order to function properly without root access. When you’re not using your device or your screen is off, it will restrict different apps to send or receive data without even closing your mobile data connection or Wi-Fi. This way it can enhance your battery life and provide you a similar experience of Marshmallow’s Doze feature.

From the below image, you can see the app’s interface with different options. 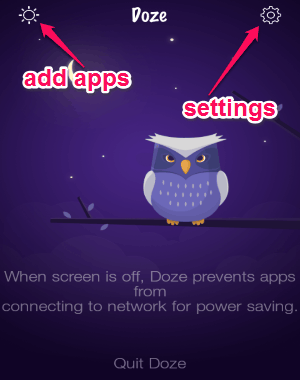 You may also like other apps to save battery life such as Easy Battery Saver, PowerMax, and many more.

How to Enjoy Marshmallow’s Doze Feature on any Android Version:

If you wish to improve battery life of your Android device, then you should try this app from Google Play Store.

Step 1: After you install this app, simply open it to start saving your battery life. Before using “Doze”, it will ask you to allow access for setting up a VPN in order to work properly. As soon as your device is connected to a VPN network, the app will start working in the background. 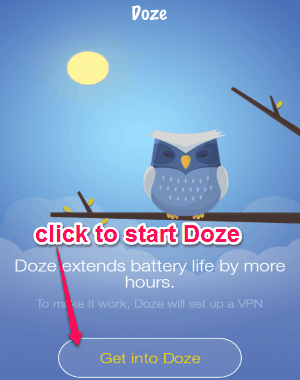 Step 2: After that the main window will appear as shown in the first screenshot. The working is pretty simple: when your screen is off it will prevent apps from connecting to the network. After you turn on the screen, it will show a message regarding the Doze mode and all those apps will resume and can send or receive data. 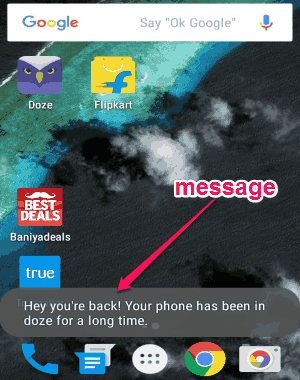 Step 3: Tap the “Sun” icon at the left top of the screen to add apps on the active lists which you want to keep active during the Doze mode. You can select any of your default as well as downloaded apps to remain active and restricting others for not connecting to network while the device screen is off. 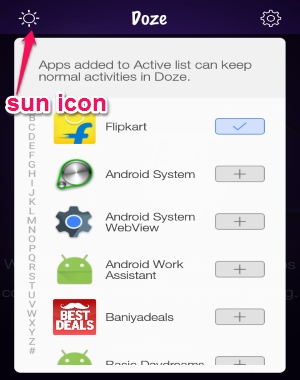 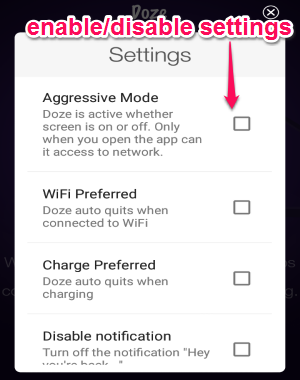 Doze is quite an interesting and useful app for Android which lets you experience the Marshmallow’s Dome feature on any Android device. No Rocket Science required as all you have to do is open up the app and allow access to set up a VPN connection. Personally, I think it offers a really good way to save battery life of your Android device.