StationRipper is a free software to record internet radio. StationRipper lets you record songs that you listen on internet radio easily. With this application you can access the available Shoutcast stations and then record the songs that are played on it in MP3 format. It smartly creates an MP3 file for each song that is played on the online streaming radio stations.

Another free software that lets you record Shoutcast radio stations is ShoutOff. 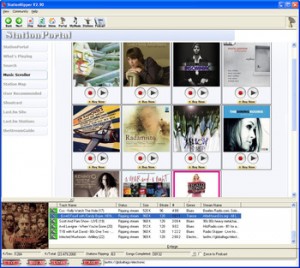 Internet radio sites such as Last.fm, iTunes Radio, AOL Radio, etc lets you listen to new and favorite songs. Many times, you might have felt the need of recording the songs that you listen on the internet radio. Recording the songs will help you save the money that you may spend on buying the whole album just to listen to one or two favorite songs. Hence, StationRipper is a very handy tool that lets you record music from the radio as and when you want.

StationRipper lets you record up to 2 streams at one time and also lets you schedule downloads. The application has a very simple interface and if you do not know how to make use of it to record internet radio; you can have a look at the dedicated demo provided for each of the website like Pandora.com, Last.fm, Slacker.com, etc.

However, the free version does not lets you record from Last.Fm and Pandora. For downloading music from these websites you can use Music Zilla.

Here’s a quick look at the features of StationRipper: