DualVideoPlayer is a free media player that lets you play two videos at the same time on its simple interface. It can be helpful if you want to compare a video file which is same but having different video formats. You can play that video, check quality of both video formats, and can select the best one to keep with you. This is a unique feature that you won’t find in most of the other media players. Its name suits it as it is specially designed to play two videos simultaneously. It supports multiple popular video formats like mkv, flv, mp4, avi, wmv etc.

Apart from playing two videos simultaneously, it has many more uses. You can play audio files (such as ogg, mp3 etc.) too with this player. Other than this, you can use it as an image viewer that can display added image and can even play animated gif. Thus you won’t need to use gif viewer to play animations.

It’s a multi purpose media player that you can use to play two videos at the same time, play animations, and audio files.

Screenshot above shows interface of DualVideoPlayer which is quite simple and looks similar to that of  VLC player. Its interface is equally separated in two parts to play two videos. You won’t find lot of options available on its interface. But there are two main tabs: ‘Open Movie A’ and ‘Open Movie B’ available to add a video/image/audio file to play. Other than this, there are basic playback controls available to play/pause and stop current video.

There are some more options that you can find by right-clicking on any part of its interface. Options like: 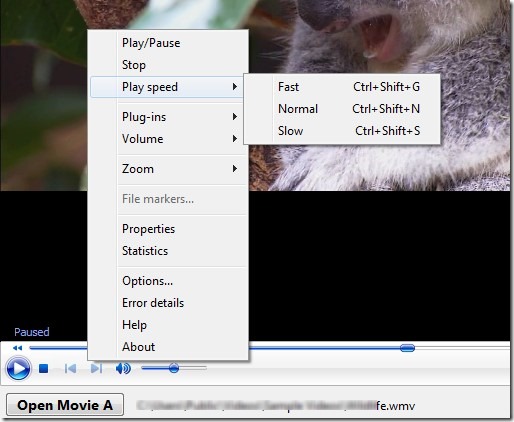 Some Key Features of DualVideoPlayer to Play Two videos simultaneously:

This player does not plays online videos. But there are other ways if you are looking to play multiple Youtube videos together.

DualVideoPlayer is really a useful media player that lets you view two different videos or same video (having different formats) simultaneously. Other than this unique feature, it can be used as an image viewer, animated gif viewer, and audio player. Try it yourself and download it free using the below link: