Here’s a list of 5 Android eBay apps which you can use to shop on the go, using your Android smartphone or tablet. Keeping tabs on what’s going on with your eBay account is very important, especially if you have active auctions that require you to post bids. Let’s also not forget about the convenience of being able to browse eBay from a tablet or smartphone looking for the best possible deal without having to turn on your desktop or laptop.

With some of the Android ebay apps that we mentioned down below, you can do just that. 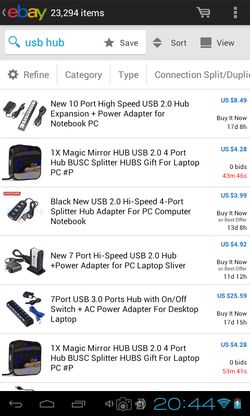 We will start our list with the official app that’s released by eBay itself. Even though it might be a bit bulky, it’s still a great eBay app that has a lot of useful features.

Without logging in you’ll be able to browse eBay and look for the cheapest possible deals. To actually buy something, participate in auctions and register an account with the app.

Get eBay by eBay. 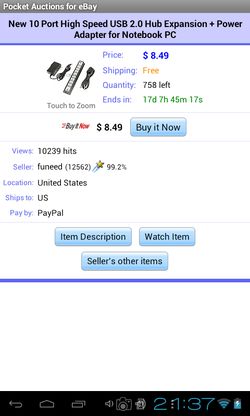 If you’re not satisfied with the previously mentioned eBay app for Android, you may wanna try Pocket Auctions for eBay instead.

What exactly makes it better you must be wondering. Well for starters it consumes a lot less resources than the official eBay app, which makes it perfect if you have an older device. It also includes several other interesting features, like for example audio notifications for when an auction where you’re bidding is ending. It’s an app built around auctions, but you can use it also to browse and search regular eBay sales.

Get Pocket Auctions for eBay. 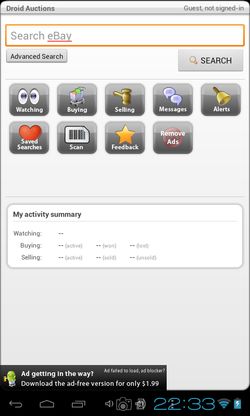 Droid Auctions for eBay is another Android eBay app, you could say a client, which posses as a serious threat to the eBays own app.

From the screenshot of the main menu you can see that there aren’t that many things that you can’t do with Droid Auctions. Everything’s there, product search, product tracking, notifications, widgets. The only thing that’s not available is product listing, meaning you cannot setup items for sale with this app.

Get Droid Auctions for eBay. 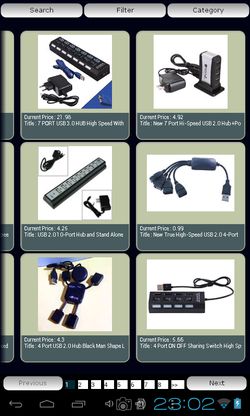 Now for something a little bit more simpler we’re gonna mention two casual apps that don’t require you to type in your information in order to use them.

Ebay Search will only search through eBay, nothing else. You will see results as images and prices of course so that you can see a ball park figure of how much something would cost. 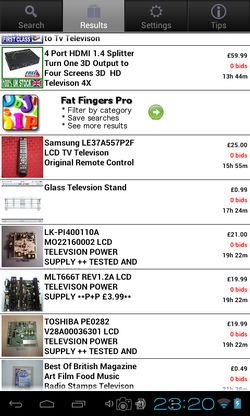 Fat Fingers searches for sellers who made spelling mistakes in auction titles. Because of spelling mistakes their auction won’t turn up in standard search and therefore you won’t have competition when bidding in an auction, in theory at least. Try it and see how it goes.

Get Fat Fingers: for eBay Bargains.

Despite testing the official Android eBay app, we were impressed the most with Pocket Auctions and Fat Fingers at the end. In the end it’s up to you. Try all the apps that we mentioned here and see how it goes.