There are a number of reasons that make Google Chrome the most popular and widely used browser out there. A no-nonsense UI, an ever increasing collection of useful extensions, real-time syncing, the list goes on. But perhaps the most important reason that makes Chrome rank number one in the list of most popular browsers is the fact that it’s always being updated with all sorts of major and minor features. Some of these features are instantly noticeable, while others are a bit more subtle. But one thing’s for sure, all of them are useful in one way or the another.

One such recently introduced feature of Google Chrome, shows a little speaker icon on any tab in which any media having audio content (YouTube video, streaming music etc.) is being played. This is a small but extremely nifty feature, as it instantly lets you know which tab is playing audio content, even if it’s not in focus. But is that all this little speaker icon can do?

Not really, as the speaker icon can also be used to mute (and of course, unmute) the audio that’s playing in a tab. You’d like that, wouldn’t you? Then let’s head over to the other side of the jump, and see how you can mute audio playing in any Google Chrome tab.

How To Mute Audio Playing In Any Google Chrome Tab?

It’s extremely simple to use the little speaker icon for muting (and unmuting) the audio playing in any Google Chrome tab, irrespective of whether it’s in focus or not. However, doing this requires you to tinker with Chrome’s experimental flags. So make sure you know what you’re doing, before you decide to get on with it. That being said, here’s a detailed step by step tutorial, illustrating how to get this thing rolling:

Step 1: Open up Google Chrome, key in chrome://flags in the omnibox, and hit Enter. You should be now on the Chrome flags page, which lists all the experimental browser features. Scroll down to the find the Enable tab audio muting UI control flag, and set it to Enabled.

Step 2: As you probably already know, a restart prompt will now come up at the bottom. Click on the Relaunch Now button to restart Google Chrome.

Step 3: And we’re all set, folks. Going forward, whenever you play any audio (or any other media having audio content) in a tab, look for the tiny speaker icon on the tab. To mute the audio being played, all you’ll have to do is click on the icon. And to unmute, simply click on the icon again. The best thing is that it works even if the tab playing audio is out of focus. Here’s a screenshot: 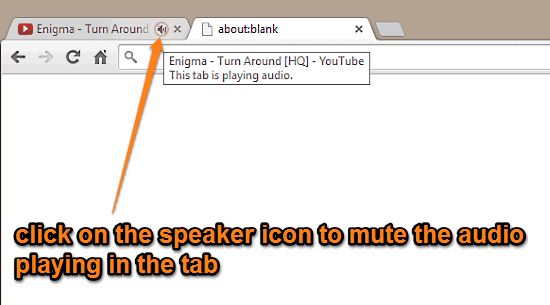 Pretty awesome, don’t you think? In addition to this, you can also right click on the audio playing tab, and select the Mute tab option to do the same.

Also See: How To Sync Selective Items In Google Chrome?

Google Chrome is an extremely feature laden browser, having a whole lot of big and small features that place it a couple of notches above its competitors. And this little speaker icon that lets you know which tab is currently playing audio is one such small but useful feature. Add to it the fact that you can use this icon to even mute/unmute the audio being played, now that’s icing on the cake. Give it a shot, you’ll love it.