This tutorial explains how to auto hide scrollbars in Google Chrome web browser. By default, Google Chrome (and all other web browsers) display always-on vertical and horizontal scrollbars on any website having scrollable content (which includes pretty much every major website these days), which stay visible permanently. While this may not be that much of a problem for majority of the users (especially for those having really big computer displays), these always-on scrollbars can be (and in most cases, are) quite a nuisance for users having small screen computers (e.g. netbooks), because they just stay on the screen taking up valuable space. However, these nagging scrollbars can be easily auto hidden in Google Chrome, thanks to a useful experimental feature of Google’s browser. All set to re-claim some of that valuable display space of your computer’s screen? Let’s see how it’s done.

Note: I know you guys might feel annoyed at my pointing this time and again, but hey, you gotta be careful with your software. As mentioned in my previous articles detailing how to save webpages in MHTML format in Google Chrome, and how to enable automatic password suggestions in Google Chrome, this tutorial also requires you to dive into the deep, dark (OK, it’s not that scary!) flags sub-section of Google Chrome. These “flags” are experimental features that may or may not make it to the upcoming stable releases of Google Chrome. While most of the changes they do are harmless and reversible, you still need to proceed with caution, or you might end up re-installing your beloved browser from scratch.

Why Even Bother Auto Hiding Those Scrollbars?

As mentioned in the beginning of the article, Google Chrome (and all other web browsers) display always-on vertical and horizontal scrollbars on any website having scrollable content. This is not even an issue for most of the users, as almost all of them have computers with really big displays (some even use their TVs as their computer monitors), but these always-on scrollbars are quite a problem for users with small screened computers (e.g netbooks with screen sizes 10 inches and less). With the screen real-estate already limited on these displays, what is the point of having the scrollbars always staring in your face, especially when you only need them while scrolling the content up/down, and left/right? And seriously, with finger scrolling support on almost all laptop track pads, who even uses scrollbars these days? But it’s kinda hard to get rid of them. So the next best thing is to auto hide them, so they don’t pester you again. Makes sense, right?

How To Auto Hide Scrollbars In Google Chrome?

Using Google Chrome’s experimental flags sub-section to auto hide scrollbars is really easy. Here’s a little step by step process, illustrating how to do it:

Step 1: Fire up Google Chrome. Type in “chrome://flags” in the URL bar, and hit Enter.

Step 2: You should now be on the Flags page of Google Chrome. This page consists of a vertical listing of all of Google Chrome’s experimental features, called Flags (what else?). Now the flag we’re looking for is called Overlay Scrollbars. Scroll down (how ironic!) the list to find it, and once found, change its value from Default to Enabled (using the drop down selection menu). Check out the screenshot below:

Step 3: Once you do that, Google Chrome will issue the standard browser restart prompt at the bottom. Click the Relaunch Now button to restart Google Chrome.

Step 4: That’s it fellas. From now on, whenever you visit any website having scrollable content, you will no longer have those nagging always-in-your-face horizontal and vertical scrollbars. Instead, you’ll now have auto-hiding minimal scrollbars that appear only when you move your mouse pointer to either edge of the screen, and conveniently slide out of view when not needed. Check out the comparative screenshot: 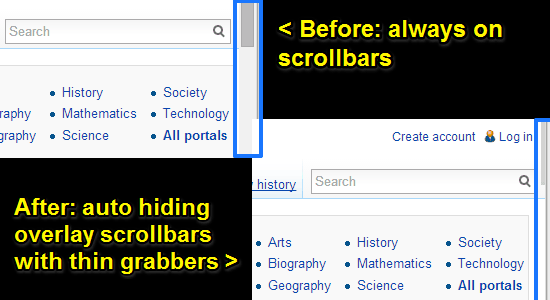 Scrollbars are one of the essential elements of UI design, and as such, are still relevant. However, more often than not, they are not needed, but still stay on the screen taking up visual real-estate. Thankfully, using the overlay scrollbars Google Chrome flag, you can always auto hide them, bringing them up when needed. If you use Google Chrome and want to get a little more screen space for your web browsing, do give this method a try. You won’t be disappointed.