My Voice Commander is a free voice control software for Windows which you can use to run some voice commands like open file, open folder, start/create an image with webcam and so on. Voice commands can be custom made, so let’s say for example that you would like to open up a certain document using your voice only, you can do that using My Voice Commander.

To use My Voice Commander you’ll of course have to have a microphone setup. First thing that you’re gonna see after running this voice control software is the Main Menu where you’ll be able to check up on its status. Options for configuring voice commands can be accessed by switching between tabs at the top of the interface, see image down below. 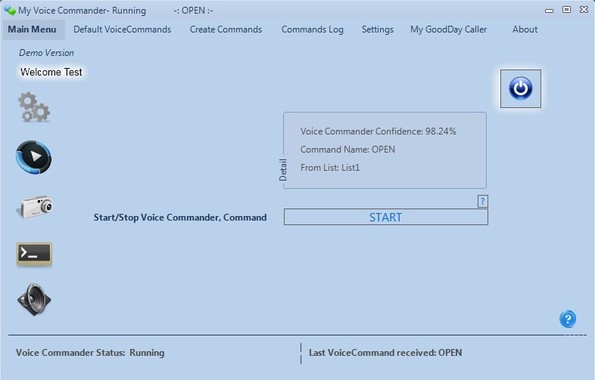 On top of the features that we’ve listed above, there’s another very interesting feature that you get called My GoodDay Caller. My GoodDay Caller is basically a greeter. It will check system time and depending on what time it is you’ll get an appropriate greeting, good morning, good afternoon, good evening or good night. Here’s a few tips to help you get up and going.

How to control Windows with voice commands using My Voice Commander

Those who are only after the default voice commands which are available, that we mentioned a few lines back, you can find out what these commands are by clicking on the Default VoiceCommands tab. On the left you can find command descriptions while in the middle the actual voice command that you have to yell can be seen and edited if you want. If you for example want to put computer to sleep, you need to say SLEEP into the microphone. 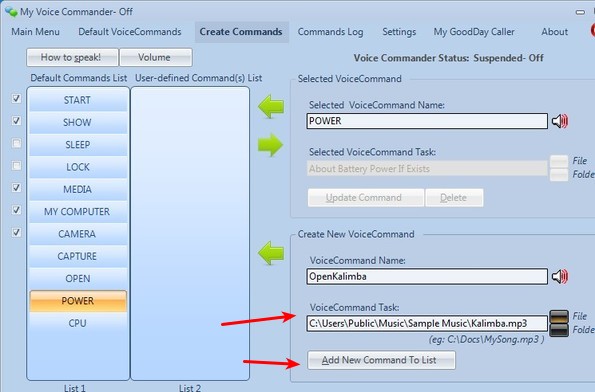 Those who are interested in creating their own commands have to open up the Create Commands tab. You can mostly open up files and folders. In the bottom right corner type in the command name, this is what you’ll have to yell, and then down below navigate to files or folder that you’d like to run. When you’re done click the Add New Command To List button. To test and see if the command works, shout it in the mic and see what happens. Open up the Settings tab for various fine tunning of voice command behavior.

My Voice Commander is surprisingly easy to setup. What’s more important is that everything works. We’ve had no problems adding new voice commands. How good command detection will be depends on your microphone, settings, volumes, the usual. Try to be as clear as possible when yelling voice commands. If you want to be greeted depending on the time of day, there’s the My GoodDay Caller for that.