Hextris is an insanely addictive Tetris inspired game. Simple to play yet incredibly fun, Hextris takes the basic concept of the good ol’ Tetris and adds a hexagonal tang to it (Hexagon, Tetris, Hextris? You’re getting the idea, right?). The gameplay basically involves the player requiring to rotate a hexagonal block inside another bigger hexagonal block. As the block is rotated by the player, random colored lines appear from all six directions (corresponding to the six sides of the hexagon). These lines stack themselves to the sides of the hexagon being rotated, with each line making a side (and hence, the entire hexagon, since they appear and stack on all six sides) bigger. The objective is simple: keep the rotating hexagonal block inside the bigger hexagonal block for as long as possible. Getting itchy fingers already? Let’s find out more.

Hextris is a web based game (although it’s also available for Google Chrome, iOS and Android) and as such, its user interface is essentially comprised of just one webpage, and that’s where all the action takes place.

Here’s how the user interface (or homepage, or whatever you wanna call it!) looks like: 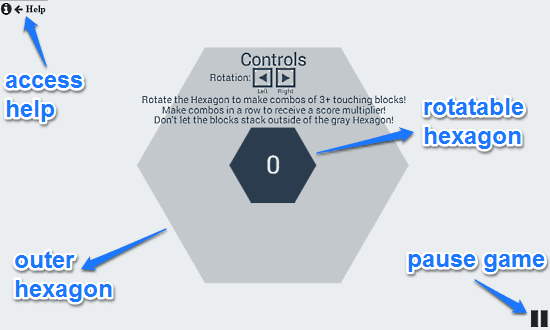 As illustrated by the above screenshot, Hextris’ user interface is pretty minimal. Front and center, it consists of the two hexagonal blocks (what else?) that I talked about in the beginning of the article. The smaller block on the inside is the one that the player has to rotate, and it also consists of the score counter. Then there’s a lighter and bigger outer block, which is the boundary within which you have to keep your rotating block. General information about the gameplay and the controls is overlaid on these hexagonal blocks. The top left corner has a shortcut for accessing the in game help, whereas the bottom right corner is where the pause button is. That’s all there’s to it, fellas!

How To Play this Insanely Addictive Tetris Inspired Game?

If you’ve ever played Tetris (and please don’t tell me you haven’t, everybody has played Tetris!), you already know that it involves joining similar colored falling blocks and making them disappear. That’s pretty much how Hextris is played. Anyways, here’s a little step by step tutorial, to get you playing:

Step 1: Go to the game’s webpage (the same as the one illustrated in the previous screenshot), and wait for a second or two, to have it start automatically.

Step 2: Now, when the game starts, you’ll notice different colored lines approaching towards the inner hexagonal block from all six sides (corresponding to the hexagon’s sides). To make an approaching line stack with a specific side of the hexagon, rotate it using the side arrow keys (Left arrow key rotates to the left, and the Right rotates to the right). Check out the screenshot below: 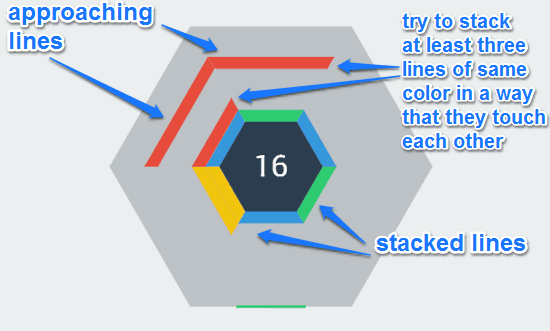 As illustrated by the above screenshot, both single and multiple random colored lines approach the inner hexagonal block. You can rotate the hexagonal block in either left or right direction to align the side with which you want to stack the line. You have to be quick enough in doing so, or the lines will automatically stack to the default side. 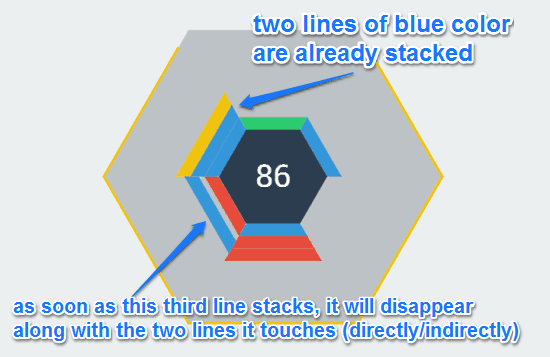 That’s pretty much all it takes to play Hextris. Just keep rotating the hexagonal block in order to make as many similar colored touching lines disappear as you can. The longer you do this, better your score will be. Pretty simple, yet super addictive, don’t you think?

Hextris is an awesome Tetris inspired game. It’s super simple to play, yet not that simple. Although initial gameplay is easy, the game gets more challenging as it progresses. And all it requires is just two keyboard keys, and some (or maybe a lot, depending on how much hooked you get to it, as you start playing!) free. Once the game ends, you can even post your high score directly to social networks. So what are you waiting for? Head over to the homepage, and start playing!