Here are 5 free mouth talking app for Android. They can be used to create funny videos by making the mouth on any photo talk with your own voice. These mouth talking apps let you select a fixed photo and then animate the mouth on the face. After that, you can also record and add your own voice to the photo such that it would look like the photo is talking. You can either import existing photos from your phone gallery or capture new photos and then convert them into hilarious mouth talking video clips. When you’re done making a funny mouth talking video using these apps, you can either save it to your phone gallery or share with your friends via Facebook, Instagram, WhatsApp, etc.

Now, let me walk you through the best mouth talking apps for Android. 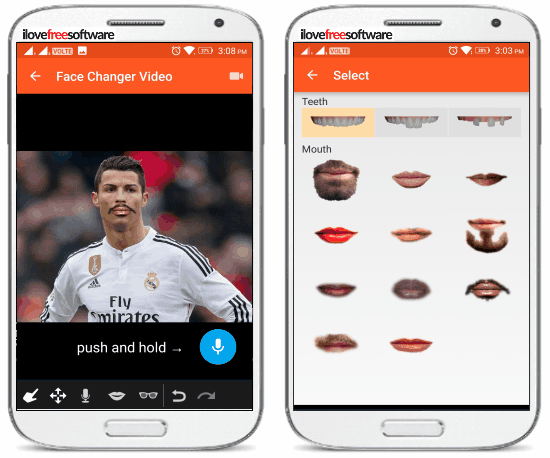 Face Changer Video is no doubt one of the best Android mouth talking apps. Using this app, you can make your fixed photos talk by adding an animated mouth and recording a voice. In order to make a photo talk, the first thing you need to do is open up the app and select a photo. You can either import a photo from gallery or select the built-in camera to take a new photo. Apart from that, it also lets you connect and use Facebook photos or simply search the web for a photo. After selecting the photo, you can go ahead and choose any of the predefined mouth styles to the photo. Currently, it offers more than 10 animated mouth styles which you can use.

Once you add a mouth style, you can simply drag and place it on the mouth of the photo. Then press the “Video Record” button at the top to start recording your mouth talking video. When the recording starts, you can add your own voice by pressing and holding the “Mic” icon. When you stop the recording, you will see that the mouth which you have added is repeating the voice which you have recorded. Additionally, it also offers different teeth styles, eyes, nose, mustache, ears, etc. which you can add to your photos. The resulting mouth talking video can be saved or shared via Facebook, Instagram, etc.

You can read more about Face Changer Video from here. 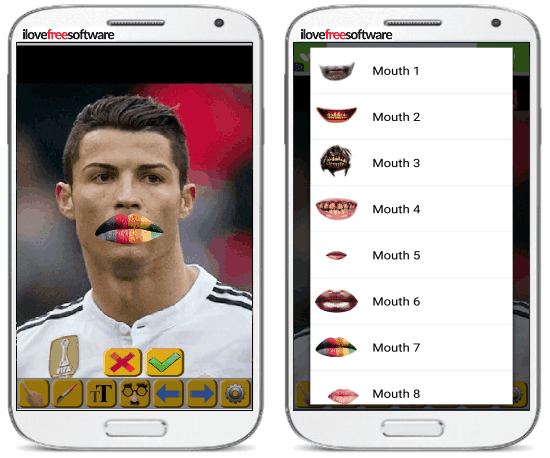 Animated Face Changer is another interesting app for Android using which you can create funny mouth talking videos. When you open up the app, it will ask you to take a new photo with the built-in camera or import any existing photo. After selecting a photo, you can tap on the “Object” icon and then select the “Mouths” option. This will allow you to add any of the 9 predefined mouths to your photo. When you add a predefined mouth to the photo, you need to simply move and place it on the face of the photo. After you’re all set with the mouth on the photo, you can proceed and record whatever you want to make the photo talk. Once you record your own voice, you can change the playback speed to high dB or low dB as you desire by dragging the slider.

Apart from letting you add different mouths, it also offers some additional objects which you can add to your photo such as hair, caps, eyes, eyebrows, glasses, noses, beards, etc. Not only that, it even allows you to draw anything on the photos using the built-in brush tool. You can save all your creation as GIF, videos, or share them directly using Facebook. 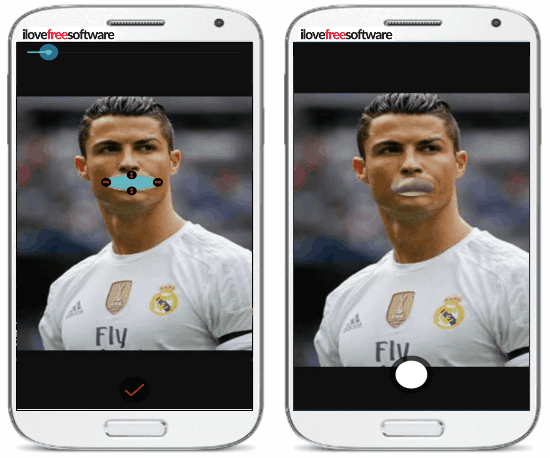 Verbalizer Lite is also a good mouth talking app for Android which lets you create hilarious videos by making your photos talk. It is quite unique from the other mouth talking apps, as it lets you add you own lips and voice to create a funny video. You can get started by selecting any of the photos from your Android gallery or cap a fresh one using the app’s camera. Similar to Face Changer Video, this app also comes with the option using which you can search the web to import a photo. When you select a photo, you can pinch on the screen to zoom in or out before you crop the photo. After that, it will automatically add a mouth marker on the screen which you need to place on the mouth area of the photo.

Once you’re done placing the mouth marker, you can proceed to the next step and make the photo talk. In this step, you will see that the area on which you have placed the marker is gone and the camera is activated in the background. This is because you can now simply point and place your own lips to the camera and start talking. You can now start the video recording and will see that the mouth of the photo is replaced by your own lips and voice on the resulting video. You can save the video to your phone storage or share it with other via social sites. 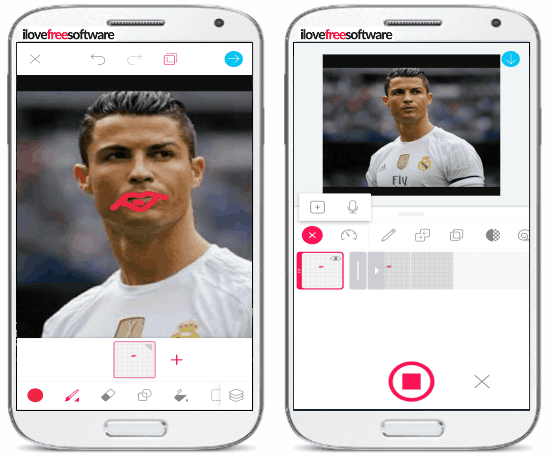 PicsArt Animator is actually a free Android app which can be used to make animated cartoons and GIFs with ease. But, I have seen that it can also be used to make mouth talking videos by drawing animated mouths manually. Actually, what you can do is you can simply select a photo and then start drawing the mouth with the help of multiple frames. For example, let’s say you have added two frames, then you can draw a closed mouth on one frame and opened mouth on another. Now, when you play the animation, it will look like the photo is talking. So, ultimately drawing the animated mouth will help you create a funny mouth talking video which you can save or share with others.

Similar to other mouth talking apps, this one also lets you capture new photos with the built-in camera or import photos from the phone gallery. Once you select a photo, you can use the drawing tool to draw the mouth on the first frame. After that, you can add a new frame and then draw the next movement of the mouth on the photo. In the same manner, you can add as many frames as you want until you get the perfect mouth movement. After drawing the mouth movement, you can proceed and record your own voiceover to the animated mouth. Remember, the length of the audio totally depends on the number of frames you have added. 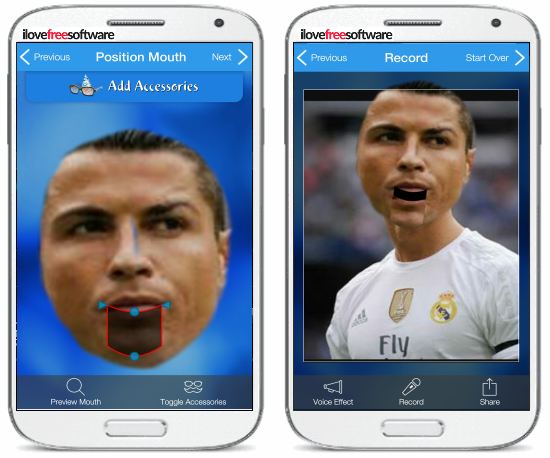 The last app in my list is “iFunFace” which also lets you make your photos talk by animating the mouth on the photos. Unlike the “Face Changer Video” and “Animated Face Changer”, this one doesn’t offer any predefined mouth styles which you can add to your photo and instead lets you make the mouth area of the photo animate. Doing so, it will look like the photo is actually talking. To get started, you need to select a photo from your phone storage or use the app’s camera to take a new photo. It even lets you connect your Facebook account and choose any of your Facebook photos. After selecting a photo, it will ask you to simply select the area on the photo which you want to animate. Then it will automatically add a marker on the selected area using which you can position the mouth on the photo.

When you’re done positioning the mouth marker, you can go ahead and start recording your own voice. Apart from your own voice, you can also insert some predefined voice effects of robot, squirrel, skeleton, etc. to the photo. Once you add a voice to the photo, the photo will start saying the words and animate the mouth at the same time. After creating a funny mouth talking video, you can share the video via YouTube, Facebook, Email, or save it to your phone.

If you are looking for Android apps to create hilarious mouth talking videos by making your photos talk, then you can go ahead and start using any of the apps explained in this post. Personally, I like Face Changer Video as it offers many predefined mouth styles and is also pretty easy to use.

Do let us know which app you liked the most.