Obscure for Android is a free Snapchat like app, which lets you share photos with friends, as well as chat with them. Using this app, you can send photos to your friends, but delete them whenever you want. In addition to that, you can also send photos and hide specific parts of the photos. You can even apply interesting effects to photos (like, zipper effect, in which a zipper will be shown over the photo and your friend will need to slide on the zipper to unzip it and see underlying photo). In addition to that, you can choose to delete the photo whenever you want, and it will be deleted from your friend’s phone, as well as your phone.

And of course, the app does not let the recipient take a screenshot of the photo (though, I am sure someone would be able to find a way around :) ) 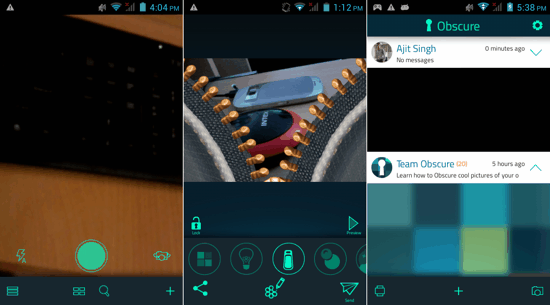 While there are other apps which offer similar functionality, they lack the control that Obscure for Android has. Some of those apps can send images which can auto-delete themselves after a fixed time duration, but this has to be pre-configured in those apps. Obscure, on the other hand, gives you total control over what you do with a sent picture even AFTER it has been sent (but you can’t set a timer here!).

Now read ahead to get the usual peek at the way that it performs and its features.

Obscure isn’t just a picture auto-delete app for Android. It gives you full control over your sent picture. You can edit it before sending, and delete it from everywhere (read : from your and the recipient’s phone) just by swiping away the image in the main conversation screen. The image editing overlays (the app description page on Play Store calls them Interactive Filters) are unique and intuitive. Some of them will even make you appreciate the devs for their out-of-the-box thinking!

How to Add Effects to your Images with Obscure for Android?

Once you launch Obscure for Android, you will see the camera up front. At the bottom of the screen there are two small icons which give you the option to select a picture from your gallery or do an online image search. Snap a picture with this inbuilt camera interface and the image will be opened immediately with all the overlay options available near the bottom of the screen, in a horizontally scrollable list.  There are a total of 9 effects which can be applied. You can customize the effects to conceal parts of your image from the recipient.

All the effects are customizable to an extent. Take for example, the ‘zipper‘ effect. In this, you can unzip the image till the desired point, and the recipient too will be able to see only that part of the image (Ahem!). Similarly, there are other cool image editing tools too. You can try each one of them and even see the preview before you send it (2nd Screenshot at top).

Getting Around Other Elements of the UI in Obscure for Android

Once you are done editing the image and tap send, you will be taken to the screen where you can select the friend you want to send it to. You can link your Google+ and Facebook accounts to Obscure and it will show you suggestions based on that. Your open conversations are listed on the left of the camera screen. You can delete any one thread from the conversations by tapping and holding on it, and selecting delete.

If you have been using Snapchat or other similar apps, you might like this one more than those other options. Obscure gives you fun ways to edit images while still offering even more robust control over the images that you send. While other auto-delete apps do get the work done, you simply can’t choose to let the recipient keep the picture if they want to, and they have virtually no editing options onboard. One small glitch I did notice on low-end hardware was that the notifications were considerably delayed. Other than that, I couldn’t spot a flaw with this app. The download link is provided, ummm, yeah, right below this paragraph. See it?

Get Obscure for Android.