You race with different other racers, whom your PC controls. All you have to do is, try to finish the race first, along with collecting totems. Because, totems are the ones, that can help you throughout the game and ultimately in finishing the game. There are plenty of good stuff in the game, that makes it a cool Windows 8 racing game app. There are obstacles to avoid, and sometimes, the other racers do cheat. Plus, the totems are laid on the track, which you have to collect. Finally, each track is different with different turns. 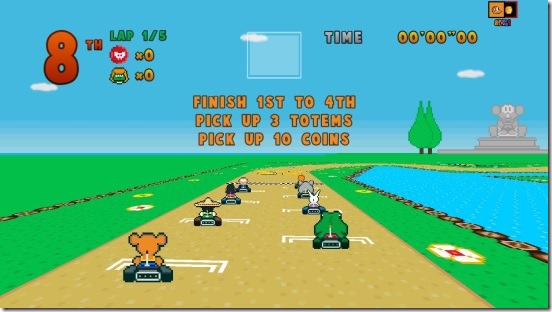 So, all the racing lovers, can play the game, and spend some time while having fun.

The app has really good gameplay. It’s fun playing the game in desktop, and even in touch device. By the looks, the game looks like a game made for kids. It has a funny and cute story, in which Froggy, daughter of frog MR. Carpo, who is in the same carting class, where you are, has run away and has announced that, she ain’t coming back. Now, it is you who have to race against other racers, from your carting class, and find Froggy to bring her back, and emerge as a hero. 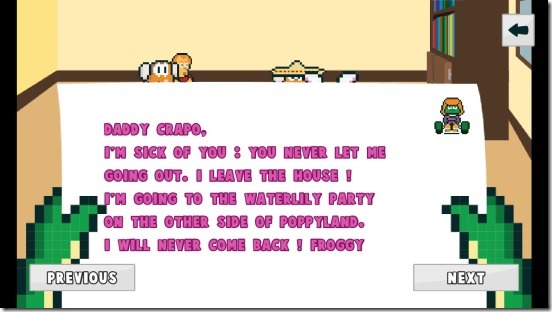 And, the only way to do this is, to collect totems in race. And, to collect totems, you have to win races, or at least finish 4th. Because, winning the race can only unlock next higher level race. So that, you can play in the next race and collect more totems. The only issue that I had with this game is: the first seven races are free. But, if you liked the game, then you always have the option to unlock all races (levels). 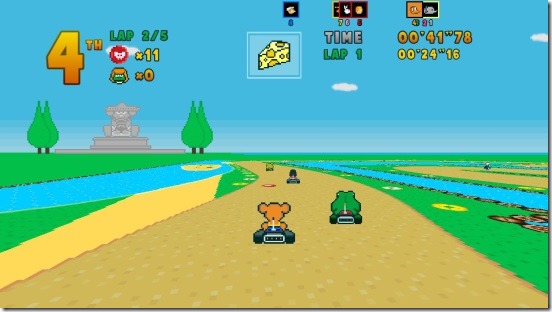 The totems are red marks, laid here and there in the track. All you need to do is, drive over them to collect them. But, during the race, you have to be careful of the other players, a stuff like poop, and a moving round face; because on coming on contact with these, makes you spin round and round, making you forget about the right track. Though, it doesn’t has any effect on your position in the race. But, it does slows you down.

The whole game is divided into levels in the form of tracks. Good thing is, each track is different and has speed booster, coins, totems etc. Which makes every single race fun. 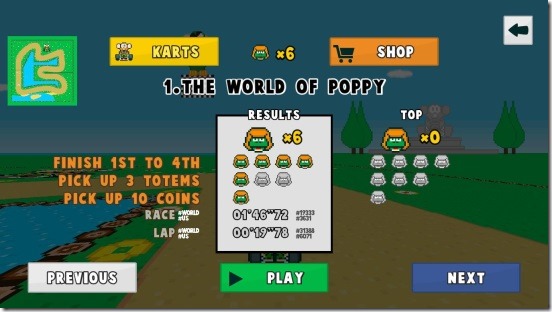 Simply, use the keyboard arrows to control the cart. Mostly, the races are of 5 laps, finish the race at least fourth. But, what I advice to finish it first, because that’s what winners do! 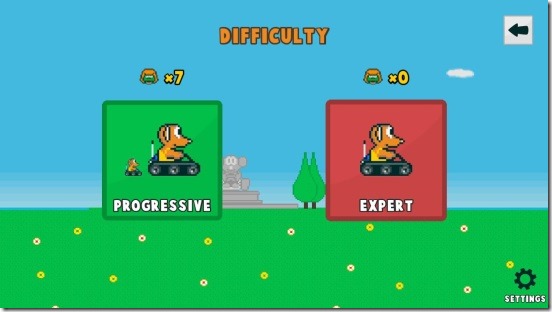 Poppy Kart, certainly is a good Windows 8 racing game app. It has got a solid story backing up the game. The 3D pixellated graphics are nice and new. Plus, the sound are funny and interesting. The gameplay is another highlight point of the game app. Even though, only seven races are free. Still, it has the ability to grab your attention and makes you enjoy the game, while playing. All in all, a good Windows 8 racing game app.