What is Hang is a free software that helps the user know what program hanged when windows / its application hangs abruptly. It is quite annoying when a running program/ the operating system itself comes to a halt for a reason that you don’t know. More often than not, the user interface of the application hangs and does not respond to user’s activity. Eventually the program terminates on its own or the user ends up terminating it manually to get out of the glitch.

It would be great to know the source/ reason of that glitch. What is Hang is a freeware that helps the user to find that. 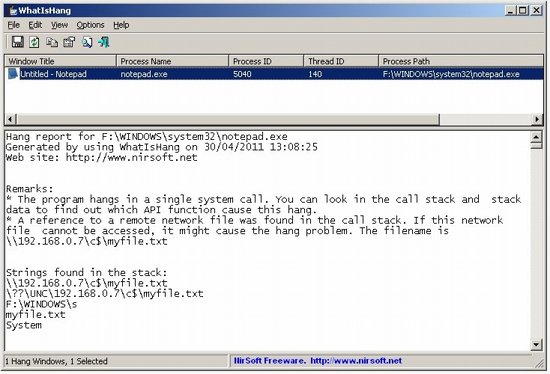 This software presents a main Window, which pretty much packs all the functionality into it. This software usually presents information such as call stacks, stack data, processor registers, and memory data. This would be of great help to those experienced users,who have prior knowledge about Windows Programming. But this freeware also presents information such as, related dll files and strings so that a naive user also will be able to find the source of a glitch and rectify it during subsequent usage.

Some other problem finding tools that we reviewed earlier include: Microsoft Fix It Center, Kaspersky GetSystemInfo, and PC Fixer.

How to Find Which Program Hanged:

The main window of this application is divided into 2 sections:

All these data help the user in identifying the source of the problem and thus helping them to rectify the glitch that might have occurred.

What is Hang is a good software to have on your system if it hangs often, and you do not know which program might be causing it. Once you have identified the program, you might want to completely uninstall that using some free uninstaller, and do a fresh installation of that.