Special Video Converter is as the name of the application suggests a very special video format converter which you can use in order to change videos from one format to another in just a few seconds. Such fast conversion is made possible by the fact that Special Video Converter doesn’t actually convert video files, it just changes the hidden extension that files have, which can sometimes cause players not to detect and play videos even though they support the codec in which the video was made. 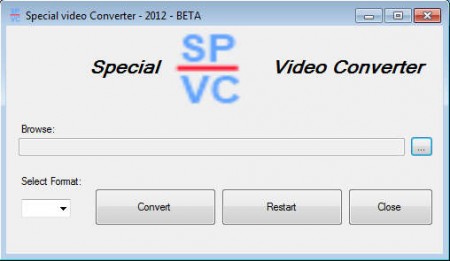 Interface of this extension changer is relatively simple and note that it’s still in beta so you might come across some minor bugs when using it, we haven’t but you never know with these things. Special Video Converter is a very small application, less than a megabyte in size, considering what it does it’s no surprise. Keep in mind that this really is only an extension changer, it’s not gonna encode videos, it’s only gonna change their extension, which is something that’s usually hidden on Windows.

How to change video extensions with Special Video Converter

Using the program isn’t very difficult, because there really aren’t that many options for you to setup before the actual conversion can take place. All the video file formats can be opened inside Special Video Converter, there are no restrictions, but the types of video formats to which you can change the extension of the selected file is limited, you can select between 20 different formats. All the common formats are supported, and there’s even support for some which are not so common:

To change the extension, you’re gonna have to browse for the video and then select the extension on the dropdown list in the lower left corner of the screen. Once that you do that, you can click on Convert button and then you should see a new file created in the same directory where the old one was located. 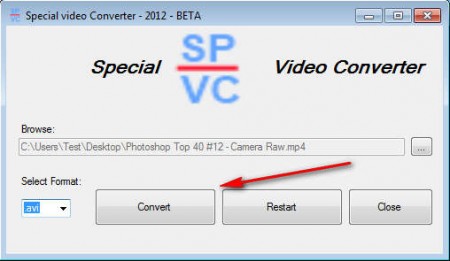 If you are interested in converting a new file, click Restart and then repeat the process, only select the new file, instead of the old one. Remember that with this you’re not actually encoding the video, you’re only changing the extension. In Windows file extensions are hidden, and if you want to change them you’re either gonna have to change Windows settings to show extensions, or use a program like Special Video Converter to avoid doing that.

Special Video Converter is a useful application if you happen to need to change the extensions of videos. Sometimes if the codec used in a video can be read by standard DVD players, all that you need to do is change the extension in order for the video to become detected by the DVD player. You can do that easily with Special Video Converter without having to change the Windows files setting, which if you’re not sure what you’re doing could cause problems. This free video extension changer is very simple to use, and it costs nothing.