Talking Tom games are always fun to play. Since Talking Tom came into being, there have been many similar apps like it. But Talking Tom is definitely the most popular one. Talking Tom was just a app where a cat named Tom repeated everything that you said in a funny voice. The app became hugely popular among kids. Seeing its popularity among kids and everyone, the developers came up with Talking Tom games to keep everyone hooked. The games like the app have become very popular amongst users of all ages. 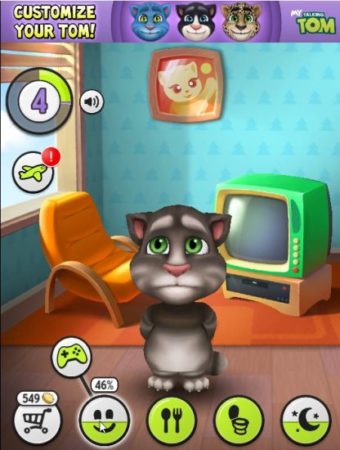 My Talking Tom is a fun game app where you get your very own Tom, who you can name anything that you want. You have to take care of him by feeding him, bathing him, making him sleep when he is tired, etc. Also you have to keep your Tom entertained, by playing various games with him. You earn points for every activity you do with Tom. You level up when you reach a certain number of points. With level up you get different things offered to you like coins, dresses, head gear, etc. Tom starts as a small kitten and keeps growing with each passing level. There are various items that you can buy using the coins that have been given to you. The games section of the app is quite entertaining as well. There is a good collection of mini games which can be played to keep yourself and Tom entertained. You can also fly around the world and meet other Tom friends. Tom will be like your very own pet who you have to take care of. Of course Tom dos what he does best, repeat everything you say in a funny voice.

Here is video gameplay of My Talking Tom for Windows 10: 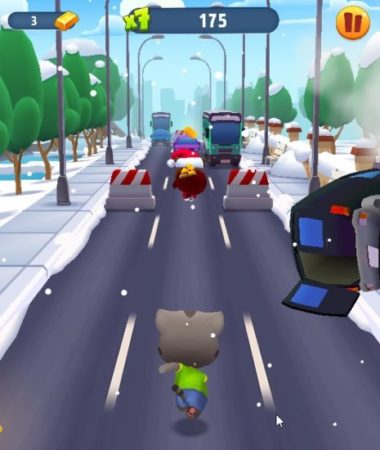 Talking Tom Gold Run is a super fun game. In this game Tom has been robbed and he has to run after the robber to collect all the gold that he has stolen. The game is a endless running game which lets you travel through different worlds, unlock other friends of Tom like Talking Angela, Talking Hank, Talking Ben, etc. You also collect vaults on the way to catch the robber. The vaults would contain loot material and prizes which you can earn. There are also certain power ups which you can use while running like magnet power to collect coins, flying power, etc. The coins you earn can be used to upgrade your house and unlock a friend of Tom.

You can also check out a detailed article about Talking Tom Gold Run for Windows 10 here. 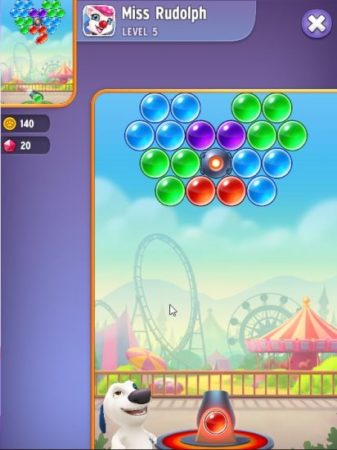 Talking Tom Bubble Shooter is another fun game app. Bubble shooter games are already so popular amongst its user. In the game you have to shoot the balls or bubbles to form a group of 3 or more same colored balls or bubbles. As soon as you make a group of 3 or more same colored balls they disappear off the board. There is a cannon at the bottom of the screen to shoot balls towards the top of the app screen. You can see which color ball you are going to be shooting when it appears in the cannon. At the top of the game screen are various colored balls. You have to match the ball in the cannon and the ones on the top to form a group of three or more. When you reach a certain score, you win the level and can move on to the next one. As you level up you can also unlock Tom’s friends.

You can also play games against other players from around the world. When you click on the “Vs” button, you will automatically be paired against some player. After playing the games with other user you can also check out your ranking on the leaderboards. You can also signup with your Facebook account to play against your friends.

Check out a detailed article on Talking Tom Bubble Shooter for Windows 10 here. 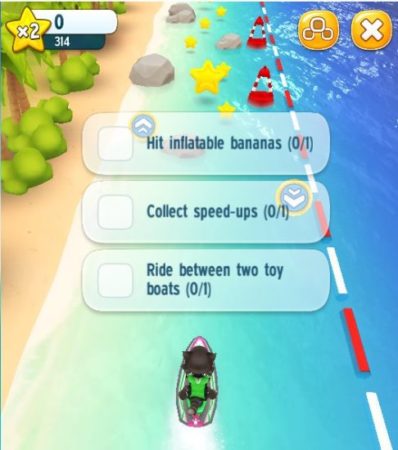 Tom’s Jetski is another fun game, which I was not able to go very far into. I kept colliding with objects and that would mean game over. But the game is pretty interesting if you don’t collide into objects. You can start the jetski ride with either Tom or Angela. You have to avoid obstacles on your way and collect coins as well. This is an endless running game, so you will never be bored of playing this game. You are shown objectives to achieve when you start the game. You get new objectives when you achieve the previous ones. You can sign in with your Facebook account to invite your friends to play as well. The objectives can be checked out from the three boxes icon button you see on your screen. The background music and graphics of the game are quite awesome.

Here is video gamplay of Tom’s Jetski for Windows 10:

So these are the 4 Talking Tom games which are available in the Windows 10 store. All the four have been developed by the Talking Tom developers Outfit7. All four games are lot of fun to play. So download them and try them out. Do let me know which game you liked the most in the comments section below.