Talking Tom Bubble Shooter is a free game app for Windows 10. You guys might be quite familiar with the bubble shooter game apps by now. In bubble shooter game, you have to group 3 bubbles of the same color to make them disappear of the board. Outfit7 Inc, the creators of Talking Tom have come up with this new game app where Talking Tom is the one shooting bubbles. You have to go through various levels and as you level up, you unlock Tom’s friends on the way.

The game screen can be seen in the below screenshot which is quite familiar to the bubble shooter games you might have played. 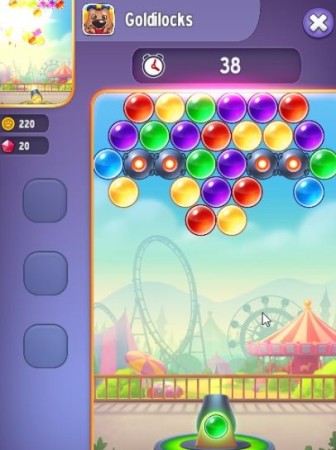 You can download the app from the Windows store easily. Once installed the game will run in a window of its own. When run for the first time it will show you a window like the one shown in the screenshot below. 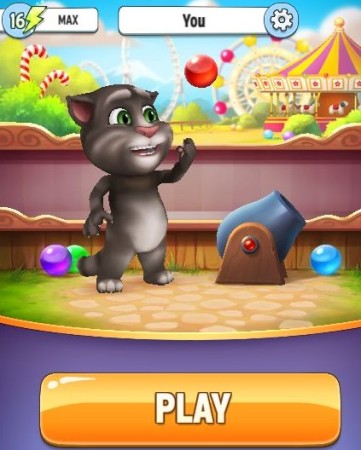 Clicking on the play button in the above screenshot will take you to the level selection screen. Start from level one when you are starting to play the game. 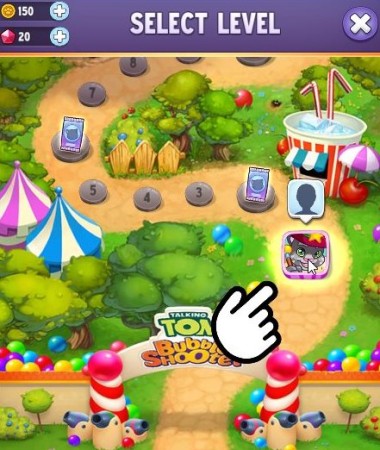 Now you will be shown the play screen where you have to shoot bubbles and pair three bubbles of the same color to make them disappear from the board. When you win the game, you level up and go to the next level.

Each new level will have new difficulties and new bonuses to be earned. 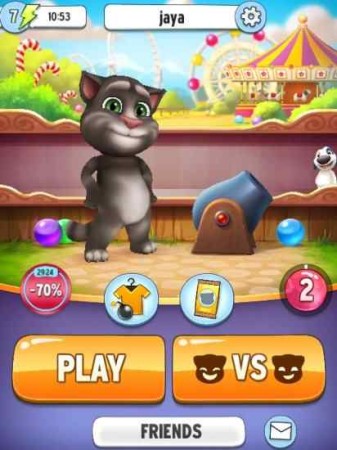 As shown in the above screenshot, the option shown at the bottom which says friends, is for inviting your friends. You can connect with your Facebook friends and invite them to play the bubble shooter game with you in real time. You also get an option to chat with your friends after the game is over.

The “vs” button you see in the above screenshot will let you play a game against an random opponent. Here also you will get an option to chat with your opponent at the end of the game. The icon you see with a number 2 on it in the above screenshot is for checking out your leader board ranking. The icon with the shirt and bomb on it let’s you pick the character you wanna play with.

The sticker icon next to it, let’s you unlock Tom’s friends by collecting sticker. As you level up, you earn stickers, putting these stickers together lets you unlock a new friend.

The background music and sounds are also quite hilarious and keep you engaged.

Overall, the game is pretty easy to play. As everyone is already familiar with the bubble shooter concept, it does not take much time to start playing the game. The only new thing is Talking Tom has been added to the equation, which somehow makes this game more fun. Just because we all love Talking Tom so much, that just adding him to this bubble shooter game makes it appear to be awesome. So everyone should definitely try it out and enjoy this bubble shooting game with Tom.