ExplainShell is a pretty cool online searchable database that lets you find detailed information about almost every major Linux command out there. Explain Shell basically works by parsing the man pages (A type of online software documentation for Unix based Operating Systems) to find the relevant help text associated with a Command (and its included arguments, if any). For this purpose, Explain Shell currently maintains an archive of the entire Ubuntu Man Page Repository. All you have to do is search a Command, and Explain Shell instantly returns the help text associated with it by parsing the information from the man page repository. Each sub-section of the Command (primary command, arguments etc.) is linked to its help text fragment by color coded lines. Getting interested? Keep reading to find out more.

Unis / Linux commands are traditionally considered complicated by the beginners. These OS do provide help pages that provide instant access to any command, but if you are using multiple commands together in a chain, then it can become pretty complicated to understand what each part of the command does. This is where ExplainShell comes into picture. Instead of just showing documentation from man pages, it actually visually shows what each part of the command means, including the arguments with the command, so you will be able to easily understand what the entire command does. This is especially useful if you are using an online service like SimpleShell to learn and practice Linux commands. This is a pretty good service that all the beginners should bookmark.

ExplainShell consists of an exceedingly minimal user interface. It simply consists of the Explain Shell logo, with a line or two beneath it explaining what the service is. A Search Bar lets you enter any Linux Terminal Command to find the help text associated with it. Finally, the homepage lists some example commands that you can directly click on to find out more about. Check out the screenshot below: 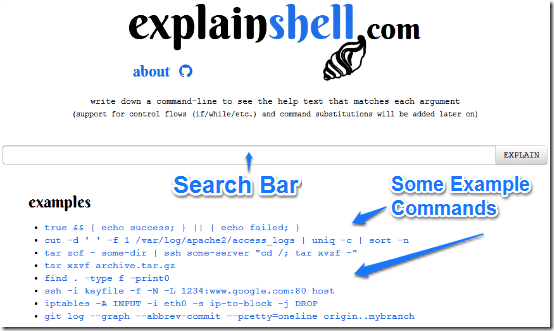 How to search for a Command’s associated help text using ExplainShell?

It’s simple, ridiculously simple. All you have to do is type the Terminal Command Line (you can either enter just the primary command, or include any arguments as well) whose associated help text you wish to see, and hit EXPLAIN. Once you do that, Explain Shell parses its man page archive and displays the relevant help text, almost instantly. As an illustration, check out the search result for sudo apt-get, an important Linux command: 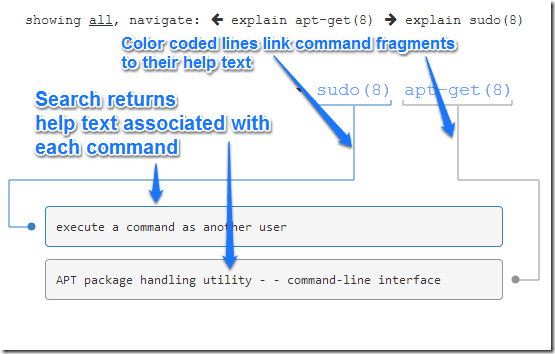 Apart from the regular search, Explain Shell also lets you search for and list all the available options for a command and their function as well. To do that, all you have to do is click on the command (or its fragment) and all the options associated with it, along with the help texts associated with all of them are displayed. 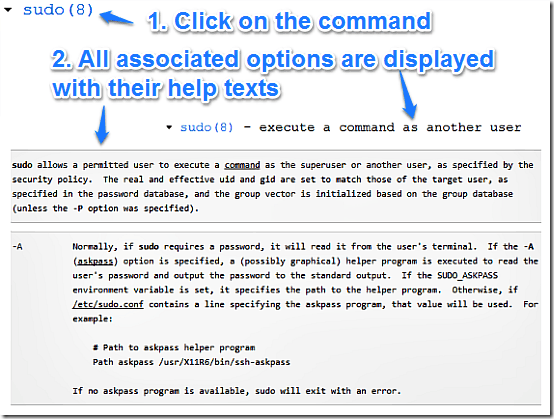 Also check out some Linux distros for kids: Qimo and DouDou Linux.

ExplainShell is a great online tool that lets you find out more about almost every Linux Terminal command out there. It becomes even more valuable if you’re just a beginner with Linux/Unix, as it serves as an instantly searchable help guide. Though the choice of font for the interface is a bit of a let down as it’s not exactly easy to read, but Explain Shell makes of for it by the wealth of information it provides about probably every Linux Terminal command out there. Give it a try, the command line geek in you will love it.