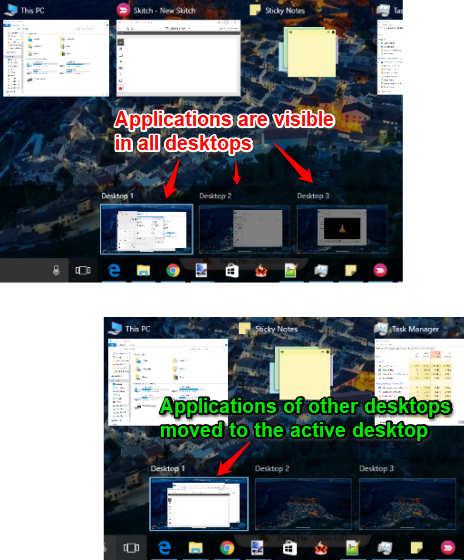 In the screenshot above, you can see that earlier there were different applications opened in multiple desktops, but later all those applications moved to a particular desktop.

Note: This software also provides other features like set separate wallpaper on virtual desktops, use hotkeys to switch between different applications, etc. You can explore other features as per your needs.

How To Move Applications of All Desktops To Current Desktop In Windows 10?

Step 1: Grab the zip file of zVirtualDesktop software and extract it. You can find its download link at the end of this review.

Step 2: You will see a zVirtualDesktop application file. Double-click that file. Now, this software will start running in the system tray.

Step 3: Open some virtual desktops using ‘Task View‘ icon visible on the taskbar and then open some folders, applications, etc., in those desktops. Now go to the desktop where you want to move the applications of rest of the desktops. After that, press “Alt+Win+H” hotkey. You can also right-click on the tray icon of this software and click on ‘Bring All Windows Here‘ option.

As soon as you will do that, it will move folders, applications, and other items of all desktops to the current desktop.

Settings page opens with Hotkeys section. There you will see Bring All Windows Here option. See the screenshot below. You can double-click on that option and then set a custom hotkey using available combinations. 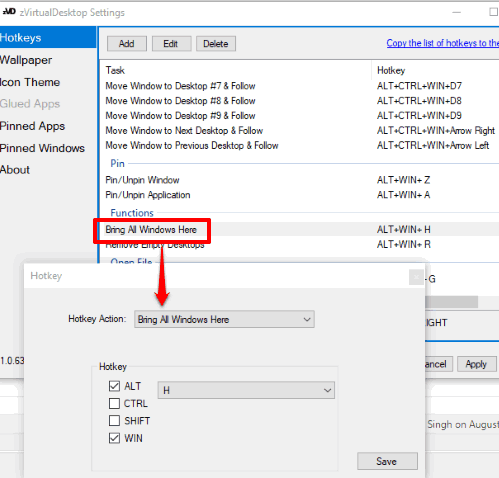 Save your setting and then you can use the new hotkey to move applications.

Moving all applications of all desktops to current desktop in Windows 10 should be a native feature. But, this feature is not available currently. Thanks to this interesting software, moving items of all desktops to the active desktop is made possible with a hotkey and/or two mouse clicks. Try it.