Photo Effects is your run of the mill “Photo effect” app. It is a free app, but you know what? We live in a post Instagram world where every other so-called “free” photo effect app looks like an enlightened retro toy camera. The Photo Effects app lets you play around with your pictures a bit with around 20 different effects. The question is are these effects any good?

Well the answer is no, they aren’t good, in fact when it boils down to it the effects are pretty damn bad. They Layout of the app isn’t half bad, but the best I can say for it is that its minimalistic, which is usually good for mobile apps but it seems to be missing something. Now what could that missing something be? *hmmm* Oh I don’t know ,everything! The app is literally bare bone! it’s just a grid of effects arranged in three weirdly named categories i.e. Fun effects, Color  effects and Adventure (I’m still wondering how an effect can be adventurous!). Talking of weird names there’s an effect in the color effects category called Big Brother, *coughs* which is basically an over exposed gray-scale effect.

When we think of a photo editor, we consider how we would edit our photos. Well what this app does is that it slaps an effect over a picture giving you no control over it whatsoever. You can share your horrifying creations on this to Facebook via the app, not a plus in my eyes. Oh and another thing it has Ads *argh*.

Use any one of these and I say it again don’t install Photo Effects. Looking at apps like this makes me think apples strict control over their app market is justified.

To download this app, scan the QR code given below. 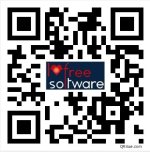