Why would anyone wanna convert SHP files into KML files, so that they might be viewed inside Google Earth you might be wondering. Well it’s because this is great way how you can add third party border outlines to Google Earth. There are shapefiles made for practically anything, maritime border outlines or historic boundaries (medieval borders that countries and kingdoms had, for example) and various other geographic region analysis made by third parties.

shp2kml has a very simple, wizard-type of interface that you can use for quick and easy SHP to KML conversion. Once that you have selected a file that you want to convert, wizard will guide you through the conversion. On the right you can see a map preview area where you can preview SHP maps before conversion.

Key features of shp2kml are:

Wizard that guides you through the conversion configuration asks you a lot of different questions about how the SHP file will be converted, how the map lines will look like, objects, etc. This is also a very useful feature that this free SHP to KML converter has.

How to convert SHP shapefiles to KML documents with shp2kml: free SHP to KML converter

From the main window that comes up after running shp2kml, open up a SHP file by clicking on the Browse icon (that’s the folder icon near the top).

Map preview of the selected file will open up right away on the right. Once that you have the SHP file opened, it’s time to start configuring the conversion. Make sure that you go over all the conversion settings before clicking Next in the wizard down below. 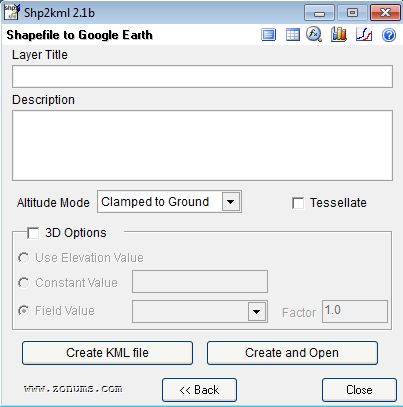 Last step of conversion will also ask you various different questions about what the converted KML file should have, what kind of features. Once that you are done, there’s a Create KML file button available that will create the KML document out of the selected SHP file following all the conversion parameters that you’ve tweaked.

shp2kml is a very easy to use SHP to KML converter. To tweak all of the conversion options that it has to offer you have to know a great deal about shapefile to KML conversion. If you would like to enjoy SHP shapefiles in Google Earth, this is the tool for you.