Bitcoin Live is a free Google Chrome extension for keeping track of changes in the value of bitcoins. If you’re not familiar with what bitcoins are, the best way to describe them would be by saying that decentralized money, very similar to torrents, but instead of sharing files, bitcoins are an online currency that was developed and is currently behaving in a lot of ways as a peer to peer network of individuals who are exchanging goods and services by using bitcoins.

With this free Google Chrome bitcoin extension you’ll be able to keep track of bitcoin prices for all the major world currencies. Even though bitcoins are great when it comes to paying for goods and services online, they cannot be used at the gas station, you local supermarket, and so on. Before they can be used in real life, you need to convert them into whatever the currency that you country uses is. 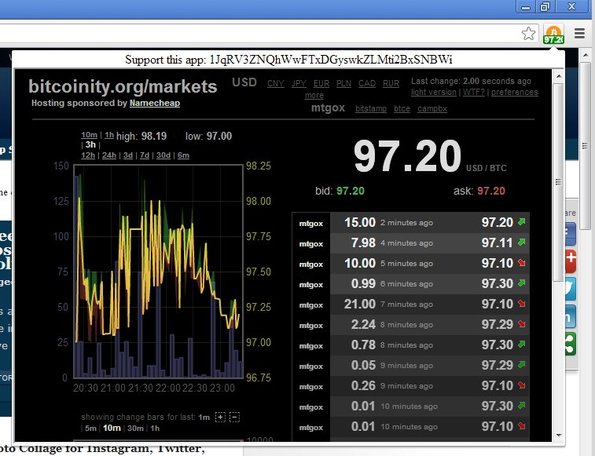 Bitcoin Live brings you bitcoin prices from 4 biggest bitcoin exchange sites. Practically every currency is supported. Left side gives you a nice chart where you can see historical changes in the bitcoin value for the selected currency, while at the top you can switch between currencies and the currencies that you would like to see calculated.

Key features of Bitcoin Live are:

Value of bitcoins is known to be very volatile. They change in value when compared to national currencies quite a bit in short periods of time. This fact made some people decide to use bitcoin for trading and making money. If you’re one of those, then this addon is a must for you so you can keep track of bitcoin prices at all time and to know when to sell.

Apart from installing the addon from the Chrome store, there’s nothing special that you need to do in order to start enjoying bitcoin prices in real time right from inside Google Chrome. 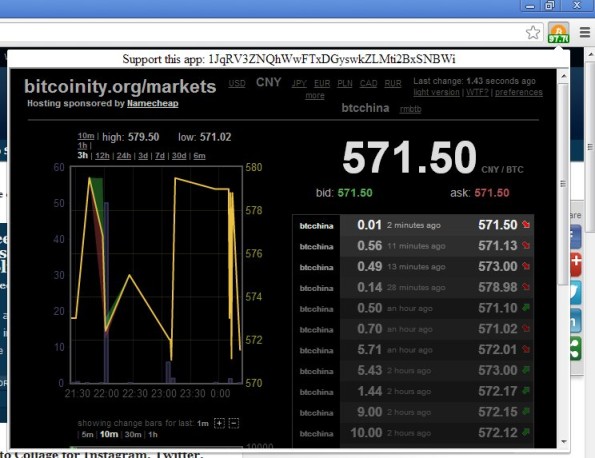 Clicking on the Bitcoin Live icon from the top right corner toolbar should open up the biton price info pop-up. At the top you can switch between currencies and also the 4 supported bitcoin exchange sites. Prices are refreshed every few minutes so that you can have the latest info about prices available at all times.

Bitcoin Live will make life easier on you if you’re using bitcoins because you won’t have to open up each of the supported bitcoin exchange sites in order to see what the current value of bitcoins is there. Detailed information it gives, charts, every change in price is logged and saved for you to see. Give this free Google Chrome bitcoin extension a try and see how it goes.