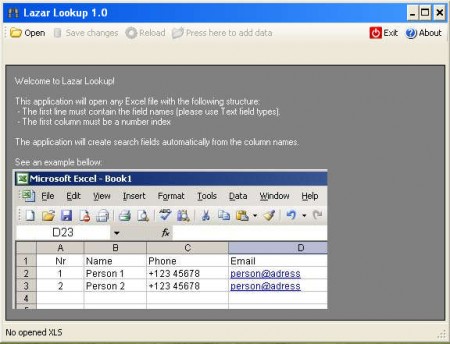 Default window that waits for you after opening Lazar Lookup can be seen on the image above. Here what we tried to explain to you in the introduction is explained a bit more with an image example. What this example tells us is that the first line of the spreadsheet document and the first column have to have names declared, which Lazar Lookup will then read and allow you to easily make searches of data stored within these fields.

What Lazar Lookup does can basically be called data mining, and it’s a very useful thing that can help out a lot on large spreadsheets which contain a lot of data. You could of course do these types of searches inside Office, but since Office is paid software, not everyone could get their hands on it, and even those who do have Office, they might not be willing to open up Excel just for this purpose. Spreadsheet editing is also available in Lazar Lookup, so you can use this free spreadsheet search tool for more than just searches. 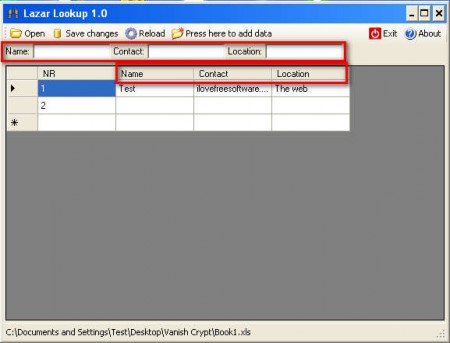 What you see on the image above is an opened document within Lazar Lookup where you can see that names of the three columns shown on the image above in red have been detected by Lazar and three separate search boxes have been created for each one of the columns in the Lazar toolbar at the top. After entering search terms inside these boxes results will immediately pop up. 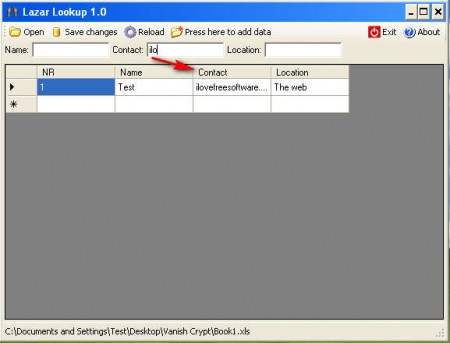 Make sure that you choose a search box which is named the same way that the column that you’re interested in searching is named. Program will read the spreadsheet and name each search box after the name of the column so you can more easily chose a search box. Notice on the image above we have boxes named:

And notice that there are cells with the same names located in the spreadsheet down below. If you had more columns a search box will be added for each one of the column names, where you can easily search through it. Drawback of Lazar is that if a spreadsheet doesn’t have first column and first row named then it will report errors when opening the document. Documents have to have this specific structure in order for Lazar Lookup to be able to open them and also only .XLS format is supported not, .XLSX, which is format used by newer versions of Office.

Lazar Lookup is great if you have or if you create spreadsheet structures which are supported. With it you can very easily find data hidden inside spreadsheet cells, and you can even perform some easy editing. Free download.