Eusing Clock is a free desktop clock widget for Windows which you can use in order to keep track of time from different time zones right from the desktop. It has a modern UI design and allows you to run several instances of the widget at the same time, one for each time zone that you’d like to track. Theme colors can be tweaked with several presets being available by default, and not just that, but you also have an alarm that you can set to remind you of important events.

Widget in action can be seen on the image down below. There’s three differently colored circles, one for minutes, that’s the most outer one, one for hours, that’s the one in the middle and the last one is for days, that’s the smallest one, the one closest to the middle. As the time passes by, they’re gonna be filling out, and as they get full either the minute, hour or day is drawing to a close. 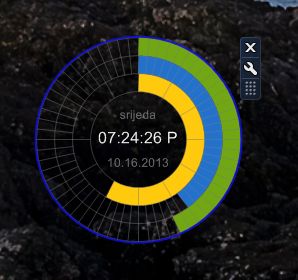 Key features of Eusing Clock are:

There’s already a clock widget in Windows, there is in Windows 7 at least, but it doesn’t have the kind of functionality that Eusing Clock has. For example the ability to run several independent clocks at the same time. Here’s a few pointers to help you get started.

Other than clicking on the downloaded exeuctable, there’s nothing else that you need to do. Time and date, alongside the useful status graphics are gonna be showed rights away. 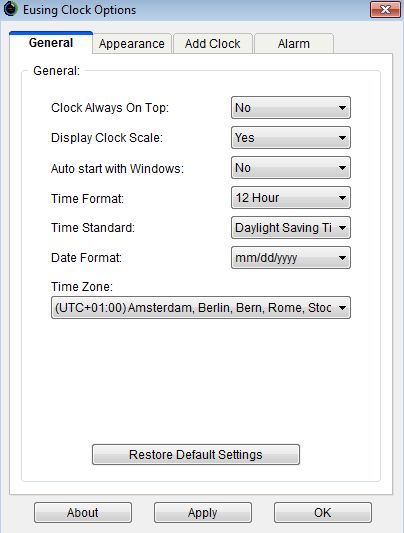 Right click on the widget and select Options to tweak things like the appearance, widget behavior (on top), time format, your time zone, etc. Last tab, Alarm, allows you to set the alarm, and the one before that is where you can add new clock widgets. 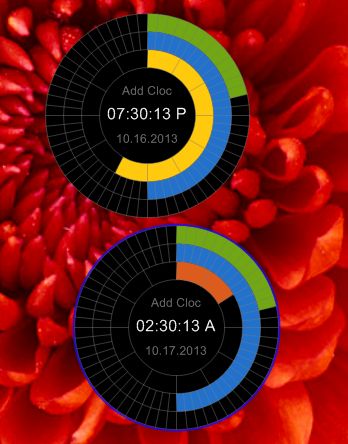 On the image above you can see 2 different instances of Eusing Clock running, for 2 different time zones. You can have several of these running at the same time, like we already mentioned.

Eusing Clock is a great desktop clock widget, which has a very modern looking interface. The fact that you can run multiple instances of it at the same time for different time zones is great for all those who need to keep track of time from different time zones.