Here’s a list of 5 best GIF viewer software for Windows 10 which can be used to view GIF animations on your Windows 10 powered devices. It’s a known fact that GIF animations aren’t entirely supported in Windows 10. By default they will open up in a web browser; at least they do on my install of Windows 10. Third party picture viewers are needed if you want to seamlessly browse an image library where GIF animations and all the other popular image formats like JPEG and PNG are mixed up together. Applications from the list down bellow let you do just that. 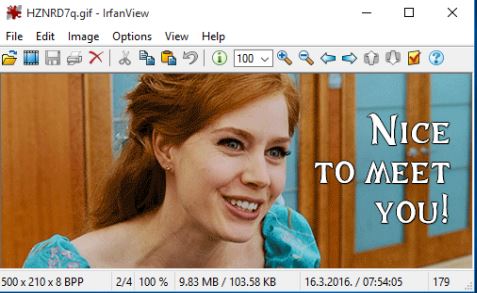 IrfanView is one of the most popular alternative image viewer software out there, and it supports GIF, JPEG, PNG, BMP and pretty much any other image format that you throw at it. Interface does seem a bit dated, especially on Windows 10, but all the usual controls are there, for image switching, zoom in/out, etc.

While GIF animations are opened, not all of the image manipulation tools are going to be available. There’s no resizing, rotating, color correction or anything like that, because those things aren’t easy to do on GIFs. Upon opening a “regular” image all the tools become available. There are though some interesting GIF specific tools like stopping animation and an extract tool for extracting frames from GIFs. 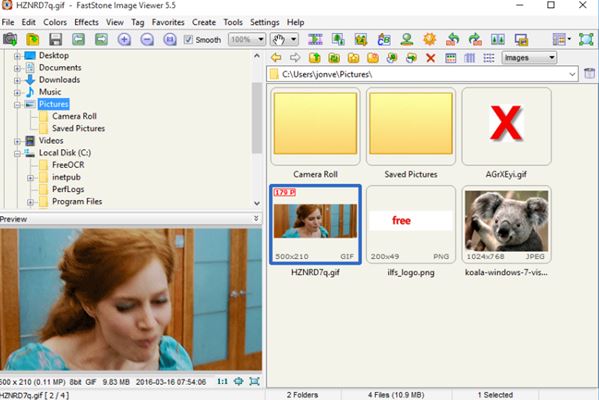 FastStone Image Viewer is another image viewer that’s been with us for a long time, and yes, its also a GIF viewer software that works just fine on Windows 10. Interface is a bit more advanced than that offered by Irfan.

Left sidebar has a folder tree view up top and the preview area down below. Rest of the interface on the right is reserved for a file browser that you can use to browse through the directories and find the GIF files you want to view. Images have thumbnails for easier overview. Selecting an image opens it up in the preview section in the bottom left corner. Double click opens it fullscreen. Like with IrfanView, editing functionality is limited. Menu toolbar at the top has all the usual controls that do work like zooming in, zooming out, left/right switching between images in the directory, etc.

Despite its name, JPEGView is a GIF viewer software for Windows 10 that covers a wide range of formats, not just JPEG. GIFs are also supported, obviously, as are PNG, TIFF, BMP, TGA, DNG and more. This is a portable application, which means no installation.

Next to being portable it’s also very simplistic, with all the menus hidden away behind the transparent toolbar down below or the right click context menu. Only the image is going to be shown, which is nice for enjoying them distraction free. Aforementioned quick access toolbar in the bottom of the window is transparent, and is only visible when you hover your mouse over the application window. Most of the options for managing GIF animations, but again limited to the basics, can be accessed by right clicking anywhere within the image window. Toolbox includes the usual tools that I already mentioned. There are some additional one also, like the ability to rotate GIFs, but changes cannot be saved unfortunately.

Get JPEGView – Image Viewer and Editor. 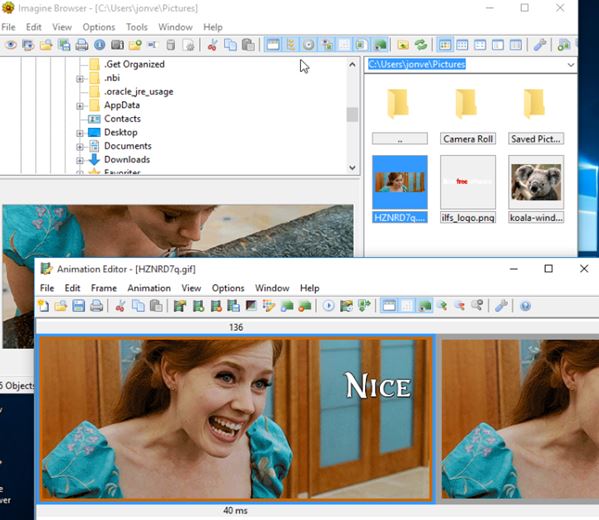 Imagine is one of the most impressive GIF viewer software for Windows 10 that I tested. I’m saying that because next to being able to view GIF animations, Imagine also has a built-in animation editor, where actual editing is possible, up to a point.

Viewer portion of Imagine looks and works similarly to how FastStone Image Viewer does. Left sidebar has a preview box in the bottom, and above folder tree view. On the right is the file browser where you can select images that you want to view. Single click opens the image in the preview box, while double click in fullscreen. Editor portion (for GIF animations) can be accessed by selecting “Menu >> Tools”. Timeline of each frame is showed, and the usual tools are available like color corrections, flip, rotate, resizing, frame extraction, etc. Imagine is also very small in size and lightweight, less than 1MB in size.

Also have a look at Online GIF Editor to Insert Text, Image, Reverse, Resize a GIF. 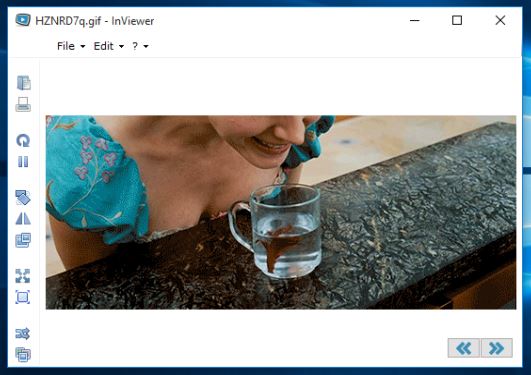 InViewer is another simplistic GIF viewer software for Windows 10 with a unique set of additional features. Next to GIF animations and a whole range of additional image files, it also supports audio and video formats like AVI, MP4, MPG, etc.

GIF viewer has controls similar to those found in a video player. Their playback can be paused, stopped, played frame by frame, etc. Zoom in/out, left/right image switching for all the other images in a directory and other basics like that are also available. Application is very small, just a couple MB in size, so it won’t take up too much space nor resources if you’re limited by those.

Every one of the 5 GIF viewer software for Windows 10 from the list above worked great for me. I do have favorites though, two of them. First is JPEGView, because its incredibly simplistic, portable, small, yet it packs quite a punch with all the features that it does have and supports. Imagine is on the opposite end of the spectrum. It’s still small and lightweight, but offers much more, including a rudimentary GIF editor. Let me know what you think, which GIF viewer you use by leaving a comment down below.