Update (24-Sep-2012): The free version of this app seems to have been removed from Google Play Store. I am trying to find if there is any other similar app that can perform similar function. 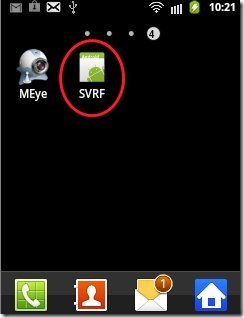 Secret Video Recording app saves all the video recording on the SD card of your Android phone. The app icon in the app launch menu is displayed similar to common launch icon as to hide its real purpose of video recording. No one can get to know about the currently running video recording. The app runs silently on Android.

The main purpose of the app is when you want to record the video without letting anyone know that you are actually recording the video. As the app runs in background, you can easily browse apps and even play games. The only task which you cannot perform is to record any other video or play any video on your Android. The video playback is limited to 30 seconds in free version of the app. For unlimited video recording, you need to buy the PRO version of the app. Also, the app may not work on all Android devices. The app works fine on the devices with an internal or external SD card to save the video file.