We will discuss about best 3 Android apps to broadcast yourself live on Android phone. Apps include Veetle; one of the most popular one in Google Play Store, Bambuser app, and Ustream app. You can install one of these apps and enjoy live streaming on your Android and across the web.

Veetle is a free Android app to stream live mobile videos on Android. This Android app allows you to broadcast live videos from one Android to other, Android to iPhone, and Android to web. The app works with a very simple logic. You just need to register with your email ID, username and password with Veetle and you are done with. Now, launch the app on your Android phone and start video streaming. You can watch the live video streaming on web, on any other Android phone, or on your iPhone. To start the live streaming, tap on the red record button in the app and then the video will go live which others can watch in real-time. To watch the live video streaming, you need to login with the same username and password on the web, Android, or iPhone.

Bambuser is a free Android app that allows you to broadcast yourself live on Android. This Android live streaming app is similar to Veetle app as discussed above. But, Bambuser skips the limitation of time gap between the actual video played and the video which is being recorded in real-time. Before getting started with Bambuser app, you need to sign-up with unique username and password on Bambuser.com. After signing-up with Bambuser, you can download and install Bambuser app on your Android phone. Now, tap on the settings button and login with the same username and password on your Android phone. Start the video recording by clicking on red button in the app. The live streaming will now start and you can watch the live video stream on the web on Bambuser.com. I didn’t find any limitations while testing the app on my Android phone. 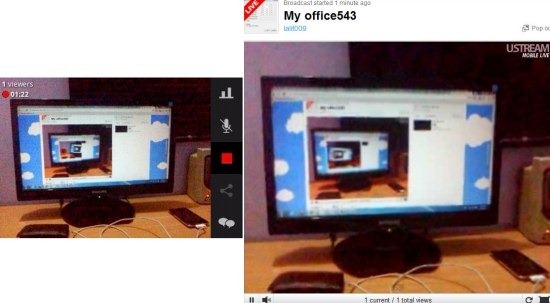 I also tried testing Justin.tv Broadcaster app on my Android phone, but due to some system issue of Justin.tv, the app was not working on my Android phone. If you want you can install it and try the app to watch live video stream. Let us know if it works for you.

If you find any other Android Live video streaming app for your Android, then do let us know in comments below.