Google has launched Google Camera as a standalone app in Google Play Store. Now you can install Google Camera app on all Android devices that run Android 4.4 and above. Google has said that it will soon make app compatible with older versions of the app as well.

We tested this on a Nexus phone running Android KitKat, and it updated the stock camera app itself, instead of installing itself as a separate app. That does makes sense as Nexus phones running Stock Android anyway have native Google Camera app and this app would be installed as an update on that. We are not sure how it works with non-Nexus devices running KitKat. Probably, it will show up as a separate camera app.

The main feature of this app are that it has made the UI much simpler than before. And the biggest improvement is a new feature called Lens Blur” has been added. With Lens Blur option you can choose the portions of the image you want to be in focus. 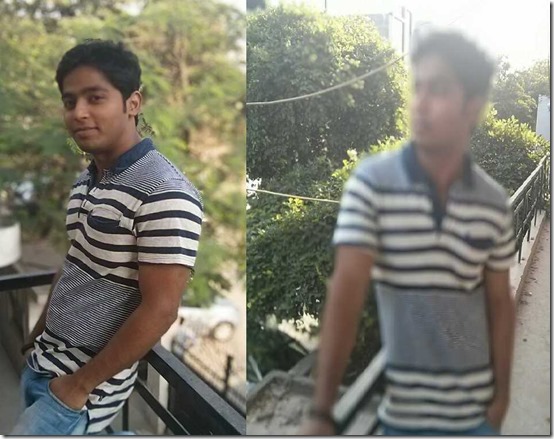 The first thing that you will notice after updating your camera app is that the user interface is shortened. Different shooting modes are hidden on the left bar, you need to swipe your finger to the right to make that visible (similar to what you do with the side navigation bar of Android). 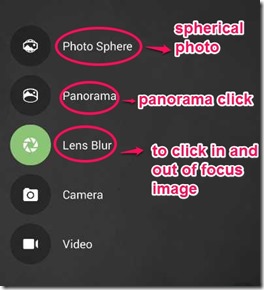 Once the menu key is visible, you will be witnessing a new clicking option that they have added  with Photo sphere and Panorama called Lens Blur. The new option upgrades you with the new feature to choose which part of the picture you want to be focused and which part you want to be blurred. You can even adjust the area to be focused after you click the image.

Google has explained technical details about this feature here. To take the photo with this mode of the camera, you are required to click the shutter bar, and then slowly move the camera along the vertical axis. You have to move your camera cautiously and slowly so as to keep the image aligned to the center. The slow movement should not be much of the hindrance as whole of the process takes about 2 seconds to complete. 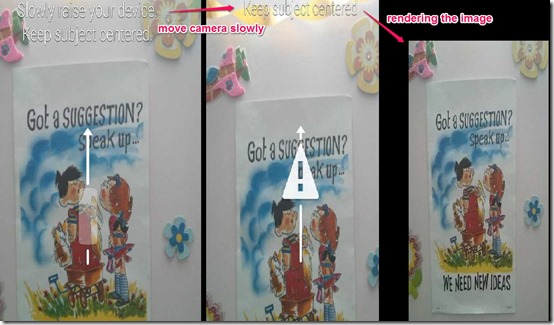 After capturing the image, it takes just few seconds to render the picture.

Once the picture is rendered, you can adjust the focus of the image. To do that, just click the option to the left side of edit option (highlighted in the screenshot below). After this, there will be a small circle on your photo. That circle can be moved to anywhere on the image by a simple double-click (the area under the circle gets focused). Rest of the area, excluding focused part, will be blurred. To adjust the blur strength, move the horizontal slider from left to right. 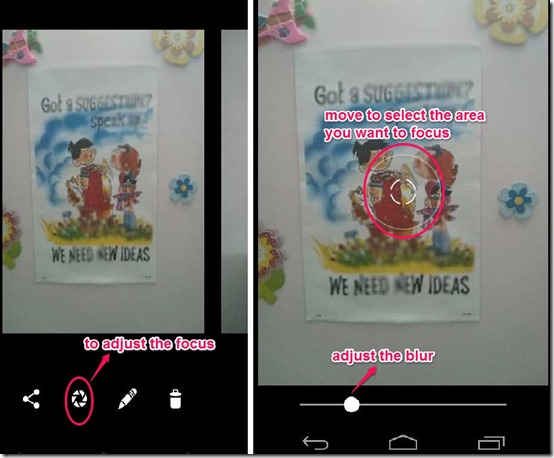 Thus the point of the image you selected is focused, while the rest have been blurred. : )

Apart from this, Google has also added some stitching algorithms to photo sphere and panorama photo clicking option. Photo sphere can now be up to 50 MP in size and the resolution of panorama can be adjusted between low, high and maximum.

That’s all that Google has provided to it’s Android Kit Kat users with this Google Camera update. Though there is much work to be done with the camera, like adding more options to the screen. But I believe that with the app finally coming up on the play store updates will follow soon.

However, do know that Google took away some options as well. Like, self-timer option is not there; though I stopped using that option since I found Whistle camera app. Apart from this, White Balance and some other advanced options have gone away.

Most of the features that this Google Camera app has added are already available in most of the recent smartphones that don’t use Stock Android. So, Google is playing catch up with this release. However, this app is definitely a major improvement over its own camera app that it ships with stock Android. The camera app is now much easier to use and the interface is more intuitive. And the features of Lens Blur, Panorama, and Photo Sphere are definitely fun to use.

All in all, if you are using a Nexus device with stock Android, it would make sense to upgrade to this app. If you are using a Samsung / HTC / LG customized Android, then you might be better off sticking with their camera app.

Get free Google Camera Update Here or scan the QR code below.